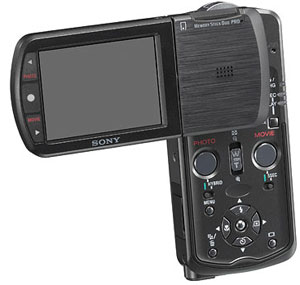 Sony has announced a new five megapixel 3x optical zoom digital camera, the DSC-M1 is the first hybrid movie/still camera with MPEG-4 movie encoding from Sony. The unique design of the DSC-M1 allows for comfortable video recording and easy compact storage because of the rotating 2.5-inch LCD the screen.

A picture may say a thousand words, but with Sony’s futuristic new Cyber-shot DSC-M1 digital camera and its extraordinary video features, it’s what happens before and after the picture is taken that says the most.

“Capturing that one special moment in time is, of course, the reason why cameras exist,” said Steve Haber, senior vice president for Sony Electronics’ Personal Mobile and Imaging Division. “But what led up to that moment, and what happened just after is an important story to tell too.”

Enter, the Cyber-shot DSC-M1, a 5.1-megapixel digital still camera that also pays particular attention to the role moving images play in preserving memories, and even more attention to making it easy to use. It will be available in December for about $600.

The camera, a slim, matte-black device about the size of a deck of cards, is held vertically, and its 2.5-inch articulated LCD swivels upward and rotates a full 270 degrees. This new shooting orientation provides more surface area to access both the menu navigation buttons and two “hot” buttons for direct access to recording stills and video. 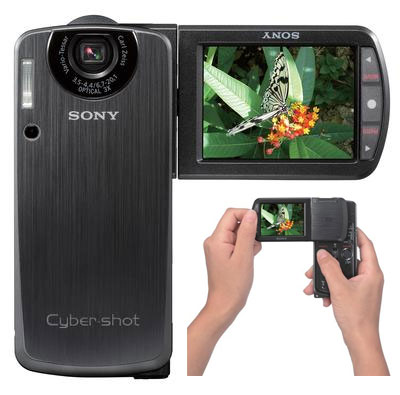 A Revolution in Short-Clip Video Capture and Compression

A new hybrid record mode makes the most of the scene being captured by automatically recording five seconds of QVGA video before and three seconds after the still image is snapped, creating a more complete record of the sights and sounds of the moment. The video and still images are stored as two separate files, but played back as one in the camera.

“This hybrid recording mode serves as something of a safety net for unanticipated moments that you’ll later be glad you caught,” Haber said. “Think of what happens immediately before and after the guest of honor walks into a surprise party. A photo may have been taken at just right moment, but the M1 can be a time machine that tells others what it was like to be there.”

The Cyber-shot DSC-M1 camera’s enhanced video functions include recording with the new MPEGMovie 4TV feature, the MPEG-4 compression format that significantly increases picture quality and resolution while dramatically reducing file size. Employing a reduced bit rate (from 11Mpbs to 2.5 Mpbs), MPEGMovie 4TV mode enables the recording of up to 27 minutes of VGA-resolution, 30-frames-per-second video with stereo sound on an optional 512 MB Memory Stick PRO Duo media card, or up to 54 minutes with the optional 1GB card, available soon.

The M1 camera operates using Sony’s InfoLithium rechargeable battery system, displaying approximate to-the-minute remaining battery life on the LCD. It comes bundled with a custom-sized Cyber-shot Station USB cradle for keeping the battery charged and the camera connected to your PC for easy downloading. The Cyber-shot Station also connects to a TV for playing back videos and stills on the big screen.

Bundled software includes the PicturePackage 1.2 application, which includes a function for converting MPEG-4 video clips into the AVI format, allowing for easy editing.