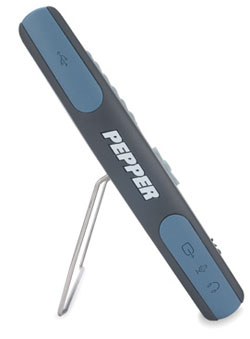 This new spicy treat released from Pepper Computer today is dubbed the Pepper Pad 2, it was announced at DEMOmobile 2004 to be the all portable solution for the digital home environment. The device looks interesting, but those keys look like a pain to use for any normal typing situation, with the built-in Wi-Fi, large high-resolution 8-inch LCD screen, and internal 20GB harddrive it would make an awesome quick-flic watching web surfin machine. Too bad they couldn’t cram in a DVD drive.

The Pepper Pad 2 will be available next year some time in January for about $800, you can pre-order the 2 pound device now, it’s available in MAC, Linux and Windows versions.

Pepper Computer, Inc., today introduced the Pepper Pad 2, the first commercial release of its simplified wireless computer, at DEMOmobile 2004. The Pepper Pad is the first product to provide, in a single, portable package, all the essentials of the digital home: e-mail, IM, and Web browsing; collecting, organizing and sharing photos, videos, and music; writing and editing; and games.

The Pepper Pad is a lightweight, Wi-Fi-enabled device, with a large, high-resolution screen, hard disk, and built-in QWERTY keypad, providing a powerful platform for a much wider range of online and off-line activities than other portable devices. It can store hours of music and videos, plus thousands of photos, and it also offers fully functional e-mail and IM and its 8.4-inch touchscreen can display a true Web page or movie. 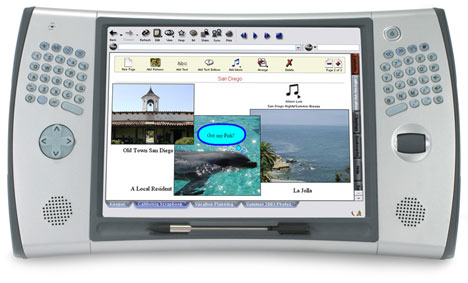 Included with the Pepper Pad is the Pepper Keeper, a tightly-integrated software product providing an uncomplicated way for consumers to enjoy the richness of digital media and the collaborative capabilities of the Internet. To solve the increasingly common problem of the “digital junk drawer,” the Pepper Keeper supports plug-in collaborative applications called “Pepper Packages,” which enable self-organizing collections for digital photos, music, videos, e-mail, Web clippings and addresses. Other Packages are for more creative and collaborative collections such as photo albums, scrapbooks, MP3 mixtapes, journals, notebooks and greeting cards. Written in Java, the Pepper Keeper runs on the Pad’s Linux operating system, but it is also available in versions for Windows and Macintosh PCs at the Pepper Store (store.pepper.com). The Pepper Keeper Sampler, which includes a variety of sample size Packages can be downloaded for free.

“The Pepper Pad was designed for the world consumers live in today, for use in the Digital Home or on-the-go. As music, photos and videos become as much a part of daily life as e-mail, IM and the Web, consumers – in the U.S. and worldwide – want them all accessible in a convenient way,” said Len Kawell, CEO of Pepper. “By putting all this in one integrated, easy-to-use package, we’re taking the complexity out of computing so it’s fun, not frustrating.”

While a limited number of Pepper Pads will be available this year from Pepper.com and more widely available from retailers in 2005, the company’s principal distribution channel initially will be broadband providers offering the Pepper Pad to their customers bundled with broadband service and other commercial partners. Several international broadband providers who are looking for such a device have expressed serious interest in the Pepper Pad, and are planning detailed reviews of the product this fall.

“This is really the only integrated software/hardware solution, designed for consumers, available to broadband providers and consumer electronics manufacturers,” said Kawell. “It suits their needs very well because the Pepper Pad can serve as an accessory to an installed PC or as a standalone home computer.”

“The Pepper Pad is a great example of a central theme of our conference this year: simplifying accessibility,” said Chris Shipley, executive producer of DEMOmobile 2004. “The winners in the emerging mobile marketplace will be the products that combine portability, ease of use and a great set of features. The Pepper Pad does just that.”

The two-pound Pepper Pad, which features instant-on capability, offers an SVGA TFT LCD screen with an 800 X 600 resolution. The system features 256 MB of SDRAM and 32 MB of flash memory. It has a rechargeable lithium polymer battery with power management providing support for a day’s worth of activities, plus an AC power supply. The 802.11b+g Wi-Fi is complemented by Bluetooth, IR and a USB 1.1 port. It also features built-in stereo speakers and microphone, jacks for headphones, external mike and external video display, plus a D-pad for navigation and gaming.

The Pad offers two options for easy text entry, a lighted thumb QWERTY keypad (plus scroll wheel) built into the device or a separate (optional) keyboard connected wirelessly by Bluetooth. The entire package is ruggedized and splash-resistant for the rigors of daily use.

The Pepper Pad 2 is being manufactured by Lite-On Technology, one of the largest OEMs/ODMs in Taiwan. “Lite-On Technology Corporation is very excited about working with Pepper Computer,” said Frank Lee, VP, New Business Development. “At Lite-On, we are always looking to partner with firms that are creating high-quality, distinctive products. The Pepper Pad is an innovative product with the potential for broad adoption in multiple geographic markets. Lite-On is pleased to be working with Pepper to bring the Pepper Pad to market.”

The Pepper Pad 1 was awarded a 2004 Innovations Award at the Consumer Electronics Show in January. The Pepper Pad 1 and initial versions of the Keeper software provided Pepper with a platform for gathering invaluable user input on the design. While identical in concept, the Pad 2 reflects a series of improvements to better meet the needs of consumers, from changing the screen orientation (to landscape) to building in Mozilla (Netscape) web support and popular plug-ins.