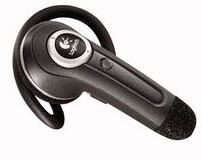 Logitech announced that their $99 Mobile Freedom Bluetooth Headset for mobile phone communications will be available in October, this is the first headset to incorporate Adaptive Frequency Hopping to reduce nearby Wi-Fi and 2.4Ghz interference.

The headset only weighs one ounce, and can fit in either ear. Logitech’s WindStop technology was used to prevent the obvious noise problems from wind and even a car’s air conditioning fan. With an internal NiMH battery, Logitech says you can get about 300 hours of standby and around 7 hours of continuous talk time.