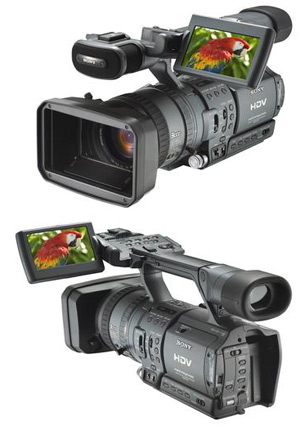 Sony today introduced the first ever high definition video camcorder for the consumer market, the HDR-FX1 Handycam is capable of recording and playing back HD video at 1440 x 1080 resolution.

The video recorded is enhanced by Sony’s new three-chip, one-megapixel Super HAD CCDs with 16:9 aspect mode for widescreen recording. The 1080i HD CCDs have an on-chip micro-lens on top of the CCD sensor that increases the light focusing rate on the fly. Each of the three lenses utilize Carl Zeiss Vario-Sonnar T* optics, minimizing warping while maximizing sharpness and contrast, they each also have their own megapixel imager allowing for impressive detail and colour.

Since the HDR-FX1 uses MPEG2 compression, similar to digital broadcasts and DVD discs, it is capable of recording onto popular DV tapes.

Sony, the worldwide camcorder market leader, today took another leap forward with the introduction of the world’s first HDV 1080i camcorder. The HDR-FX1 Handycam camcorder records and plays back high definition video with 1080 interlaced lines of resolution – the highest resolution (1440 pixels x 1080 lines) of any consumer camcorder available.

“With U.S. sales of HDTV sets exploding, along with the availability of high-definition programming, the expectation of having personal content in HD is growing rapidly,” said Linda Vuolo, director for camcorder products for Sony Electronics. “The introduction of the HDV-FX1 has been timed and targeted to meet this desire.” 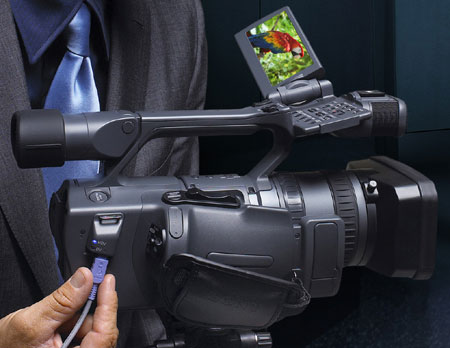 The camcorder’s best-in-class video resolution is enhanced by Sony’s new three-chip, one-megapixel Super HAD CCDs. The new 1080i HD CCDs have several improvements, including an on-chip micro-lens on top of the CCD sensor that increases the light focusing rate for focusing on the fly. There is also a newly developed 16:9 aspect mode for recording in widescreen. By giving each lens its own megapixel imager, the camcorder captures the intense detail and color that expert videographers and HD lovers appreciate.

All of this imaging power — together with the 14-bit A/D converter that processes four times more digital information than converters used in traditional television cameras — produces sharper, richer and more true-to-life images.

HD Quality in a Small Package

The HDR-FX1 camcorder employs the same MPEG2 compression scheme that is used for digital broadcasts and for DVD discs, so it can record on easy-to-find DV tapes.

Control of Sound and Vision

To meet the demands of the experienced user, the camcorder has a shooting range from 32.5mm to 390mm, a 12x optical zoom and a multitude of zoom control mechanisms, including a non-perpetual zoom ring that allows for professional-like control. Users also have the option to switch between the zoom ring, the two zoom levers as well as a variable zoom control on the handle for greater shooting flexibility.

To capture even the smallest detail with clarity, the new HDR-FX1 model offers increased focusing control with expanded focus and peaking functions. In the expanded focus mode, the camera’s LCD image is magnified up to four times its original size without any loss of resolution. The peaking function emphasizes the outline of objects creating clear contrast and clarity in a scene.

The 3.5″ SwivelScreen™ hybrid LCD offers 250,000 pixels — the highest resolution of any consumer camcorder LCD — for accurate viewing under bright lighting conditions. The LCD is conveniently located towards the front of the unit and is on the same eyelevel as the color viewfinder with the same pixel resolution.

The camcorder also features a wide-range stereo microphone for superior audio quality. Because of its unique body design and well-placed microphone, wind noise is minimized so videographers can capture the sound they want, not the noise they don’t. Additionally, sound adjustments that typically are made via a menu are now adjustable through an external audio level switch.

Custom Features for a Film-Like Feel and Smooth Transitions

With the HDR-FX1 Handycam camcorder, the budding hobbyist as well as the seasoned videographer can make their video look like a professionally-shot film. The Cinematone Gamma™ and Cineframe™ functions enable high quality picture processing to create video with the warmth, softness and richness similar to a big screen movie.

Smooth, seamless, shot transitions are achieved using the Shot Transition™ function. With settings to control focus, zoom, iris, gain, shutter and white balance, focus can gradually be shifted from the front of the screen to a deeper subject, or vice versa, enabling an effortless transition in depth of field.

For creativity and control, the HDR-FX1 camcorder allows users to define their own default settings through the Picture Profile™ function. This function offers six different profiles that can be customized and taken advantage of, depending on the scene. Scenes may include a setting for filming sunsets, another for filming people, and another for recording in black and white. And for ultimate control, the iris, gain, white balance, shutter speed and focus can also be adjusted manually.