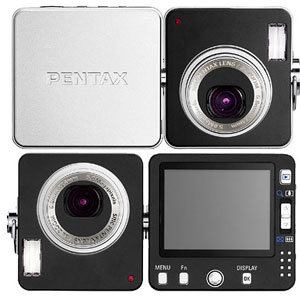 Pentax has designed the OptioX compact digital camera with a unique design and two distinct body parts that allow for a wide 180 degree range of lens positioning.

On the left side (from the user) there’s the lens, which can be easily revolved over a range of 180 degrees upward and 90 degrees downward according to your compositional demands. On the other side there’s a large LCD monitor that can remain stable in the hand regardless of the movement of the lens side. The result? 5.0 effective megapixel clarity, 3X optical zooming and the freedom of above the head or from the hip shooting — all while confirming the composition or focus with confidence on the large, high-performance, 2.0-inch, 210,000-pixel (approx.), low-temperature poly silicon TFT color LCD monitor.

For further convenience, the depth of the OptioX body is a mere 18mm, making it the thinnest model in the entire Optio series. This has been achieved through incorporation of the Sliding Lens System — a unique PENTAX mechanism that allows the lens to be completely retracted inside the body as soon as the power is turned off, making it easy to carry in a bag or pocket.

The incorporation of the newly developed ASIC (Application Specific Integrated Circuit) results in improved image quality and enhanced processing speed. The power of 5.0 effective megapixels is the user’s assurance of satisfying shooting with high-precision, high-quality imaging. Furthermore, the OptioX features a new “My Menu” function, which allows the user to group together frequently used functions and register them for fast access. Still image shooting functions can also be registered in My Menu for use even while the OptioX is being used to shoot movies or record audio. In fact, with such wide-ranging capabilities, the OptioX is more than a digital compact camera — it’s a comprehensive personal digital imaging tool designed to be carried wherever, whenever.

The design of the OptioX is revolutionary in that it separates the body into two distinct portions — one designed to move, while the other is designed to remain stationary. Each of the two parts has its own unique style, yet the camera has an attractive, unified appearance overall. Indeed, even when the side featuring the lens is being revolved, the OptioX still retains its smart, stylish look.

Alumite processed aluminum alloy has been used to form the attractive front and back panels of the OptioX, while the sides feature a resin coating. The camera also has a well thought out color scheme that combines silver and black in a sophisticated manner and both the strap loop and the tripod screw are mirror finished to become design accents. 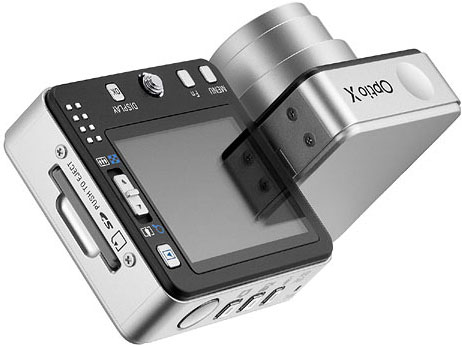 Design elements from the 1950’s, such as rectangulars with rounded corners, striking color schemes and simple geometric styling have been arranged in a manner that complements contemporary tastes in the design of the OptioX. And as a result of its development in line with the concept of being “a personal digital tool that makes people want to hold it in their hand,” the OptioX has been made much more than other compact digital cameras.

1. Shooting while confirming the image, even when composing above the head or shooting from the hip
Revolving the lens side of the camera while keeping the large LCD monitor side in clear and stable view, the OptioX lets you compose shots with confidence while shooting from within a crowd or taking pictures of flowers or a baby, for example.

2. The slimmest of the Optio Series with a depth of 18mm
With a width of just 18mm, the OptioX features the slimmest body of all of the cameras in the Optio series. This is partially due to the unique PENTAX Sliding Lens System that reduces the length required by the lens cylinder by housing the lens in two parts. The innovative design of the OptioX as a whole, which separates the body in two, also plays a role in achieving such a slim design. When the power is turned off, the lens is retracts to become totally flush with the surface of the body, making it easy to carry anywhere or slip in and out of a bag or pocket.

4. Newly developed ASIC delivers enhanced image quality and processing speed
With the incorporation of the newly developed ASIC and a finely tuned image processing algorithm, the image quality achieved by the OptioX has been improved in comparison to conventional PENTAX compact digital cameras. It reproduces more natural gradations and more meticulous color compensation. Furthermore the processing speed of the CPU inside the ASIC has been made 1.5X faster than the conventional PENTAX systems, allowing the OptioX to process a much larger volume of data at a significantly faster speed.

5. High image quality
The smc PENTAX lens is renowned for its excellent performance and assures the user of the ability to bring out the finer details of subjects. The OptioX also features 5.0 effective megapixels to achieve high-precision imaging and incorporates a primary color filter as well as the new ASIC that together assure the user of superior PENTAX quality.

7. Still shooting even during movie or voice recording
Still image shooting at a desired image size is possible even when shooting a movie or recording audio. The OptioX can also be used to record audio in a meeting and perform still shooting at the same time, making it exceptionally useful in a wide range of situations.

8. Quick menu
The Quick menu function offers quick access to different functions without the need to call up the menu screen. A simple touch of the stick lever positioned just below the LCD monitor displays the Quick menu, providing access to “REC start”, “shooting settings clear” and “key lock” when shooting still images, and to “still image shooting” and “key lock” when shooting movies.

9. Real-time warnings for “washed out” and “blacked out” areas
The OptioX displays washed-out and blacked-out areas by indicating those areas in real time while shooting. This allows the user to know which parts of the image are under- or overexposed at a glance.

10. Key lock
This function eliminates accidents when asking other people to control the OptioX, or when handing it to someone else to show stored images, literally locking and inactivating almost all buttons except for a few — namely the power button, zoom lever, center key and shutter release button during still shooting and the power button, stick lever and center key during movie shooting.

11. My Menu
In addition to the conventional three menu items of “shooting”, “playback” and “detailed settings”, “My Menu” has been added as the fourth menu. It functions as a shortcut for direct access to frequently used functions that have been pre-registered in My Menu. Indeed once functions have been registered in My Menu, they are then displayed as a priority.

12. 16 shooting modes to match different situations
The OptioX is equipped with 16 shooting modes for added user-friendliness. In shooting conditions where exposure and white balance can be tricky, all the user has to do to achieve a desired image is to select the mode that matches the situation at hand. Mode selection is also made easier with the Mode Pallet that displays all the mode icons on the LCD monitor at once. This enables the user to select the most appropriate mode from many in absolute minimal time.

13. PC camera function
The OptioX is also equipped with a PC camera function that allows the user to video chat in real time. Using Windows Messenger 5.0 with Windows XP SP1 or later, the user can use and enjoy the OptioX just as they would a videophone.