When Don Frazier setup his camera to capture the old Mississippi River bridge at Cape Girardeau being demolished, he had no idea his $15,000 camera would also be blown to bits. Surprisingly, his SanDisk 256MB CompactFlash card, with a few nicks and scratches survived the blast. The camera managed to capture the last millsecond of it’s life shown in the photo below, and one other camera on a tripod near by captured his own camera being ripped to pieces in mid-air.

Construction crews rigged a section of the bridge with 600 pounds of dynamite, intending to cause an implosion that would drop, rather than shatter, the bridge.

“We’ve heard some amazing stories about our cards surviving plane crashes and have received monthly ‘your card survived my laundry machine’ e-mails, but we’ve never seen anything like this,” said Tanya Chuang, SanDisk product marketing manager for the Ultra II and Extreme lines. “If he had been using standard analog film, it most probably would have been shredded. But with a SanDisk flash memory card, we are fortunate enough to have an extraordinary digital image that shows the last moment of his camera.” 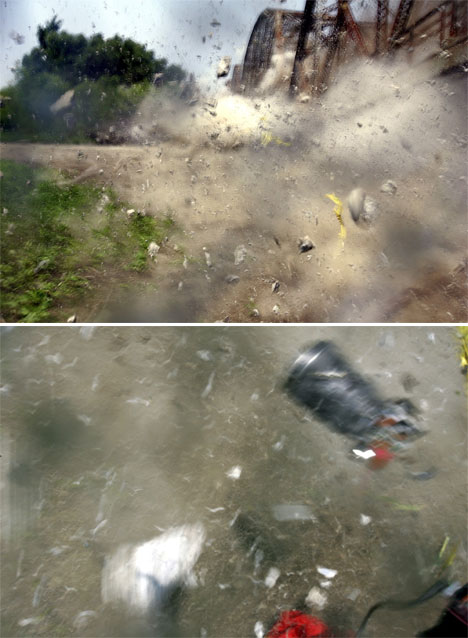