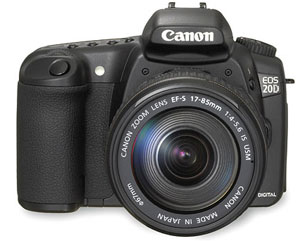 Canon was forced to announce the new EOS 20D digital SLR camera today, the information was published on the Canon USA website several days ago. If this was accidental or dileberate, we will never know. However, the new Canon EOS 20D sounds like it will kick some serious arse. It has a nice 8.2 megapixel 22.5 x 15.0 mm CMOS sensor, and can burst capture 23 images at 5fps.

“The class-leading combination of 8.2 Megapixels and the best of EOS digital SLR technology now surpasses the performance, operability and image quality of film SLRs,” said Mogens Jensen, Head of Canon Consumer Imaging Europe. “To the many semi-professional and serious amateur photographers who have been waiting for an affordable digital alternative to their familiar film bodies, the EOS 20D will represent digital photographic freedom – a digital coming of age.”

Many key elements of the popular EOS 10D have been re-designed to further improve performance and image quality. The second generation DIGIC II processor combines with an increased buffer size to deliver a 23 frame burst rate at 5 fps – ideal for action and nature shoots and nearly double the performance of the EOS 10D. Separate JPEG and RAW files can write simultaneously with no loss in performance.

The second generation 8.2 Megapixel APS-C size CMOS sensor is purpose built for the EOS 20D. An extremely high ISO 3200 setting is selectable to further extend the camera’s wide ISO 100-1600 speed range. High pixel density is made possible by the introduction of smaller area photo-diodes with a better S/N ratio and equivalent sensitivity to those of the EOS 10D. Improved high-performance micro lenses positioned above each photo-diode increase the percentage of light reaching the pixels, enhancing high-ISO performance and improving image quality. A new on-chip noise elimination circuit amplifies the signal in slow-read steps to eradicate fixed pattern and random noise, while a 3-layer optical low-pass filter placed in front of the sensor reduces false colour effects.

A new focus sensor and algorithm, and an increase from 7 to 9-point wide-area AF improves auto focusing speed and accuracy, particularly evident with off-centre subjects. Auto focus points not only cover a broader area of the frame, they are distributed such that focusing is fast and sharp when the classic ‘rule-of-thirds’ or ‘golden section’ composition technique is employed. The centre focussing point functions as a cross-type sensor when using lenses with an f/2.8 or faster aperture.

The newly developed APS-C sized 8.2 Megapixel CMOS sensor gives the camera a 1.6x magnification advantage over 35mm format cameras. While this creates an obvious advantage for telephoto lenses, it is less beneficial when meeting wide-angle requirements. The EOS 20D is compatible with more than 60 Canon EF lenses, including Canon’s new EF-S lenses. The camera’s launch is supported with the announcement of two new EF-S lenses, the EF-S 17-85mm f/4-5.6 IS USM and EF-S 10-22mm f/3.5-4.5 USM . These provide photographers with ultra-wide 16-35mm effective, and 5x wide-tele 28-135mm effective ranges. The new lens’ quality and inclusion of ultra-sonic motors is in line with that expected of a semi-professional camera system.

The EOS 20D features Canon’s new E-TTL II distance linked flash algorithm for both its built-in and external Speedlite units for vastly improved flash results. Rather than relying solely on pre-flash metering and focus points, the system takes into account such factors as lens distance information, ambient light readings and the detection of reflective objects in order to calculate flash output. Results improve considerably in circumstances such as recomposed shots, or where the appearance of high or low reflective objects in the frame would otherwise throw off flash exposure. The camera is compatible with the entire EX series Speedlite flash range. This includes Canon’s new Speedlite 580EX, which auto zooms when fitted to the EOS 20D to provide optimum flash coverage for the camera’s APS-C sensor size, and transmits colour temperature information for improved colour stability.

In a first for digital SLR, the EOS 20D features a new Monochrome mode, making it possible to shoot in black and white. A range of filter effects (yellow, orange, red and green) can be digitally applied in much the same way that advanced black & white photographers use colour filters. Toning effects (sepia, blue, purple and green) add a colour to the final result, providing the same effect as conventional chemical toning.

The EOS 20D is the first DSLR model from Canon to feature a USB 2.0 Hi-Speed interface, making it viable to shoot with the camera tethered to a computer in a studio environment, recording images straight to hard disk and circumventing the need for post-shoot card downloads. USB 2.0 Hi Speed is approximately 40 times faster than standard USB 1.1, which was used on the previous EOS 10D. The EOS 20D also has a Video out interface to allow monitor viewing, and the camera is PictBridge compliant to support direct printing to any compatible photo printer without the need for first downloading to a computer. It takes both CompactFlash Type I and Type II cards, including cards of 2Gb and larger capacity.

The EOS 20D is compatible with the optional DVK-E2 data verification kit, used in fields such as insurance, reporting and police work to verify the authenticity of images taken with the camera.
Software