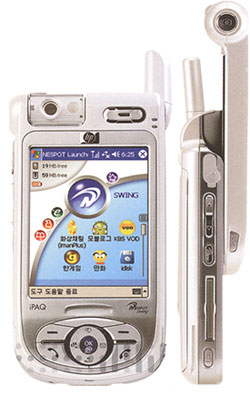 Rumours about a new Korean HP iPaq Smartphone called the RW6100 surfaced this week on several forums and websites. It seems that HP has designed a slider style smartphone with hidden keypad underneath. The phone has the same form factor as the Samsung SGH-D410.

The RW6100 features an Intel PXA270 processor running on Windows Mobile 2003 SE 64MB’s of RAM and 128MB’s of ROM. The battery is standard 1400mAh, the screen is a 2.8 inch 262,000 color TFT LCD QVGA Display. This smartphone is designed to operate on Korea’s new CDMA network, it also features WiFi support and a 1.1 megapixel cmos camera.