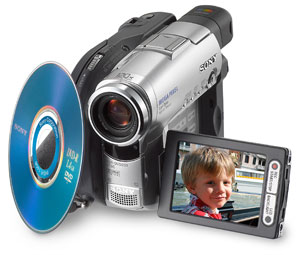 Sony has launched a successor to their previous DVD recording camcorders today. The DCR-DVD301 has a hybrid 3.5-inch SwivelScreen and records directly to 3-inch DVD-R/RW discs.

The screen’s hybrid technology minimizes LCD washout even in bright sunlight and can rotate up to 270-degrees for multiple viewing angles. Beyond its 3.5-inch screen, the camcorder will share most of the same features as the DCR-DVD201 DVD Handycam camcorder, such as a one-megapixel Advanced HAD CCD imager and the ability to take one-megapixel digital still images.

The DCR-DVD301 model will be available in October for about $1,100 and has similar specifications to the DCR-DVD101 and DVD201 camcorders.

The DCR-DVD101 and DCR-DVD201 camcorders weigh just over a pound and are small enough to fit into a jacket pocket.

For added convenience, both models have a mini joystick controller on the outside of the units to easily navigate through the camcorders’ menu systems.

Sony’s DVD camcorders record on 3-inch DVD-R and DVD-RW media and each model incorporates a 2.5-inch SwivelScreen hybrid LCD display with a start/stop record button on the frame. This additional record button offers added flexibility when you are trying to capture a challenging angle like a low shot of a child crawling on the floor or when you flip the screen to record yourself. And when bright sunlight is the day’s biggest challenge, hybrid technology prevents LCD washout so the viewing display can be employed

DVD recordings can be enjoyed using most current home and PC DVD players, as well as later releases of PlayStation2 videogame consoles. In addition to recording video, both camcorders also capture JPEG still images for viewing on either your PC or TV.

The disc-based recording system allows for quick access to favorite scenes and pictures without the fuss of rewinding and fast-forwarding. Thumbnail images of video are created from the start of every recorded scene.