The world’s first Amorphous Silicon TFT-LCD display panel was unveiled by Samsung today. The 2.6-inch VGA quality LCD has a 300ppi image quality similar to notebook PC and desktop monitors. This is about 7 times more resolution than a 42-inch High-Definition LCD TV.

Amorphous silicon (a-Si) and polycrystalline silicon (polysilicon or p-Si) are the two main silicon technologies used in the thin film transistors for LCDs. Low-temperature polysilicon can achieve a high degree of integration, making it the method of choice when producing panels that require high resolution. 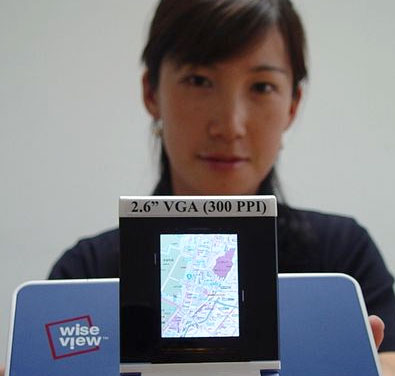 Conventional wisdom has held that structural properties would limit a-Si technology to 150ppi resolution. However, Samsung Electronics engineers completed a 1.94-inch display with qVGA (207ppi) resolution in May of this year, and continued to improve upon its own a-Si technology to achieve VGA resolution for small- and mid-sized display panels.

Samsung’s latest LCD is a transflective model (200:1 contrast ratio and 150cd/m brightness), which provides sharp images even when exposed to bright summer sunshine. Mass production on existing lines is scheduled to begin in December of this year, giving the company a competitive edge in terms of production cost and supply capability. Samsung will eventually expand the a-Si technology to “smart phones” and mobile phones equipped for digital multimedia broadcasting.