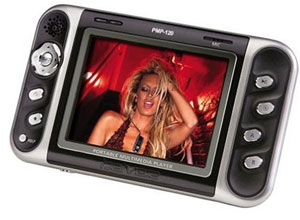 iRiver PMP-100 series Portable Media Players will be available beginning today from the iRiver estore and will follow from other online retailers this week. The two models available are the iRiver PMP-120 and the iRiver PMP-140, 20GB and 40GB versions selling for $500 and $600 retail. They have a super sharp 3.5-inch colour display for watching AVI and MPEG4 videos or JPEG still images. It also supports MP3, WMA, WAV and ASF audio formats.

Pricing and Availability
The PMP-100 series will be available at the iRiver eStore http://www.iriveramerica.com/estore, Best Buy retail stores and other select retail outlets in August 2004. Suggested retail price for PMP-120 is USD $499.99 and PMP-140 is USD $599.99. For information on retail availability, please visit http://www.iriveramerica.com.