Nintendo readies the DS portable video game system for release this year, it will hit store shelves first in North America and Japan. The new design has been finalized and images were released to the press, this is a much sharper and a more durable looking design than what they first released.

The Nintendo DS features a thinner, black base and an angular platinum flip-top cover. The face buttons and shoulder buttons are larger, and some have been reconfigured for optimum use. The unit includes a new storage slot for the touch screen’s stylus, and the speakers now broadcast in stereo sound, with or without headphones. 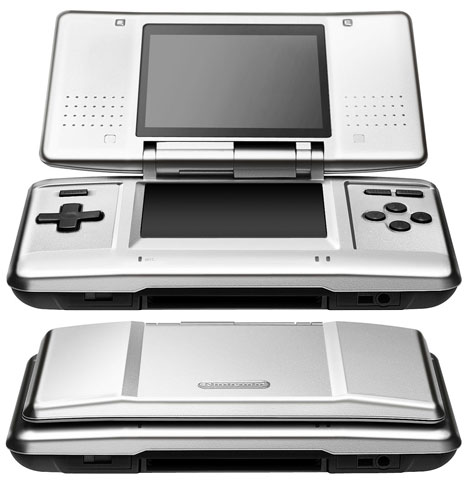 “The Nintendo DS will change the future of hand-held gaming,” says Satoru Iwata, president of Nintendo Co., Ltd. “Dual screens, chat functions, a touch screen, wireless capabilities, voice recognition — these abilities surpass anything attempted before, and consumers will benefit from the creativity and innovation the new features bring to the world of video games.”

Software companies worldwide have more than 120 Nintendo DS games in development. Nintendo alone is developing more than 20 titles, and in excess of 100 companies have signed on to create games for the new system.

Nintendo will announce the launch date, price and game lineup for Nintendo DS at a later date.