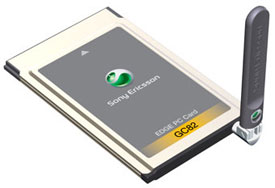 Rogers Wireless today announced the availability of the Sony Ericsson GC82 EDGE PC Card across the Rogers Wireless network in Canada. The Company recently completed the rollout of EDGE technology across its nationwide network that reaches more than 93% of the Canadian population, making 3G services and wireless data speeds that are up to three times faster than those previously available.

Rogers Wireless began commercial trials of EDGE (Enhanced Data Rates for Global Evolution) technology on its network in the Greater Vancouver Area in late 2003. With the deployment of this technology now complete in all of its markets, Rogers Wireless customers across Canada who use EDGE capable devices will now be able to benefit from the fastest national wireless data network available in Canada.

EDGE is a natural step in GSM evolution. It is a 3G radio technology that provides wireless data speeds that are up to three times faster than those provided by GPRS (General Packet Radio Service), enabling Rogers Wireless customers to be as productive on the go as they are in the office or at home with services such as Internet access, e-mail and access to corporate Intranets over existing infrastructure at the highest wireless data speeds available today.

The Sony Ericsson EDGE PC Card is a wireless dual-band (both 850 and 1900 MHz) and dual mode (both EDGE and GPRS) PC Card which provides the highest available data speeds over GSM/EDGE/GPRS networks.

As previously announced, the deployment of Rogers Wireless EDGE capability is concurrent with the rollout of EDGE by AT&T Wireless Services Inc. in the United States. The simultaneous provision of 3G service by both companies ensures that customers on both sides of the border have access to EDGE high-speed data service wherever they travel across North America.