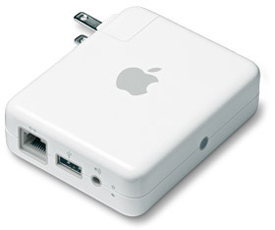 Apple today announced it has begun shipping AirPort Express, the world’s first 802.11g mobile base station that features wireless Internet connections and USB printing for use at home or on the road. AirPort Express also features both analog and digital audio outputs that can be connected to a home stereo, and together with AirTunes music networking software gives users a simple and inexpensive way to wirelessly stream music from iTunes on their Mac or PC to any room in the house. Apple has received more than 80,000 pre-orders for AirPort Express, which was introduced last month.

“With over 80,000 pre-orders, AirPort Express is off to a great start as the first 802.11g mobile base station for Mac and PC users,” said Phil Schiller, Apple’s senior vice president of Worldwide Product Marketing. “With the breakthrough AirTunes feature, music lovers can now listen to their iTunes music collection streamed wirelessly to a stereo located anywhere in their home.”

AirPort Express includes a built-in combination digital and analog audio connector allowing users to connect it to a home stereo, powered analog speakers or the latest digital 5.1 surround sound systems. iTunes 4.6 automatically detects the remote speakers and displays them in a simple pop-up list for the user to select. Once the remote speakers are selected, AirTunes wirelessly streams the iTunes music from the computer to the AirPort Express base station. AirTunes music is encoded to protect it from theft while streaming across the wireless music network and uses Apple’s lossless compression technology to ensure no loss of sound quality. AirPort Express provides a range of up to 150 feet, and multiple AirPort Express base stations can be bridged together to send music to extended areas.*

Pricing & Availability
AirPort Express is available now through the Apple Store, Apple’s retail stores and Apple Authorized Resellers for a suggested retail price of $129 (US). AirTunes requires iTunes 4.6, which is available as a free download. Wireless printing over USB requires Mac OS X version 10.2.7 or later or Windows XP or Windows 2000 and a compatible printer.