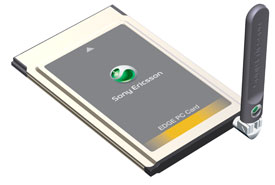 The new Sony Ericsson GC-83 EDGE/GPRS PC Modem Card (850/1800/1900Mhz) gives customers the ability to use one device to access either high-speed EDGE or GPRS wireless data connections in the United States and in many countries across the world. EDGE high-speed wireless data connections are now available in areas of Brazil, Canada, Chile, Finland, Hong Kong, Israel, Italy, Mexico, Puerto Rico and several other countries. When traveling in areas where EDGE has not yet been enabled, the modem operates at GPRS speeds in more than 50 countries.

AT&T Wireless EDGE service is available across the United States in more than 7,500 cities and towns and in areas along more than 30,000 miles of highways. Customers can expect to receive average data speeds between 100-130kbps, with bursts to 200kbps, when using the modem card and a laptop. In addition to the wireless modem card, AT&T Wireless has several EDGE handsets available that can also be used as modems for wireless connections. According to 3G Americas, a wireless industry organization, more than 60 wireless carriers worldwide are expected to deploy EDGE networks in the near future.

Customers can receive a free Sony Ericsson GC-83 modem, after rebate, valued at $249.99 when they sign a two-year agreement on the AT&T Wireless Unlimited Mobile Internet $79.99 Data Plan.