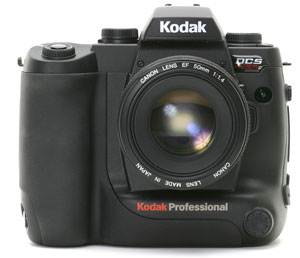 The first 14 megapixel digital SLR has been reviewed by Digital Photograph Review. The Kodak DCS Pro is now the second camera to have a true 35mm size sensor, the first was the Canon EOS-1Ds, it’s also the only camera to support Canon mount lenses.

From the review “It’s sad that Kodak hasn’t learnt anything from the poor performing 14n which was a slow camera by anyone’s standards. To compound things however the SLR/c is even slower taking an eternal six to seven seconds to start up, another eight seconds if the camera needs to ‘Recalibrate’ (occasionally and if you change to certain ISO’s), then we get on to Auto Review which takes six seconds for a RAW file and an pretty shocking fourteen seconds for a JPEG. This falls well short of even the cheapest digital SLR’s, and prosumer digital cameras.”