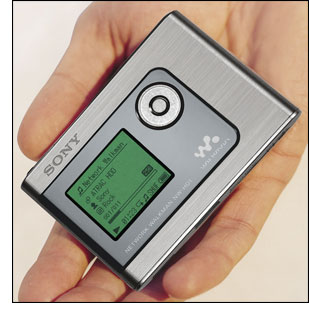 Sony has introduced two new network music players today, the NW-HD1 with 20GB hard drive, and the smaller NW-E75 with 256MB of flash-memory.

“Both these players will soon join our extensive line of more than 20 portable digital music players, offering the largest variety of ways to listen to downloaded music.”

Designed to work with the Connect online music store and personal computer, a 20 GB hard drive digital music player and a 256 MB flash-based device join Hi-MD Walkman digital music players, Net MD Walkman recorders, and ATRAC CD Walkman players. As a result, consumers have both a variety of hardware options along with an end-to-end system for downloading, managing and taking music with them.

The epitome of elegant design, the silver NW-HD1 model weighs less than 4 ounces making it the world’s smallest portable audio device built with a 1.8-inch, 20GB hard drive. Music lovers will be able to store up to 13,000 four-minute songs recorded at 48 kilobits per seconds (kbps) on this sexy little player that fits right in the palm of your hand.

The new hard-drive player lives up to the Walkman legacy for stability and endurance. It houses an internal rechargeable battery that provides up to 30 hours of continuous playback. G-Sensor shock protection offers an advantage over traditional hard drives by safeguarding the player’s internal mechanisms to protect against impact and help prevent a loss of data. Sony’s skip-free G-Protection technology is also incorporated to help eliminate skipping during active uses, as well as to provide quick recovery from both horizontal and vertical shock. 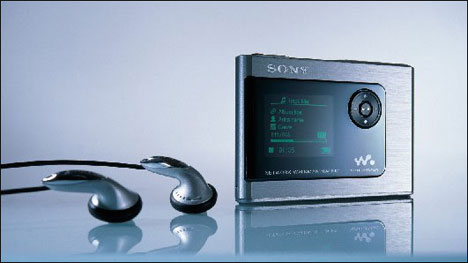 The new hard-drive device connects to a compatible computer via a USB 2.0 digital interface for high-speed music transfers. It comes bundled with SonicStage version 2.1 software, which makes it easy to import, manage and transfer music collections. With SonicStage software, playlists or track information created in the jukebox can be automatically transferred to the device.

Accessing music on the Network Walkman player is as easy as a click of a thumb. Sony’s Jog Dial navigation lets you quickly retrieve tracks and playlists on the seven-line backlit LCD display. Four different display modes offer the flexibility to navigate through track numbers, bit rates, song titles, artist names and more.

The NW-HD1 Network Walkman digital music player will also come supplied with a USB charging cradle and carrying pouch. It will be available in mid-August for less than $400.

Measuring a little more than an inch and weighing about 1.5 ounces (without battery), the sassy NW-E75 model is small enough to fit on a key chain, yet is home to 256 MB of built-in memory that stores up to 170 four-minute songs at 48 kbps. This tiny, tune-token is also huge on battery life, achieving up to 70 hours of continuous playback on one AAA battery. And since there are no moving parts, users can enjoy uninterrupted playback even during serious activity.

The NW-E75 Network Walkman digital music player will be available in mid-July for less than $200.