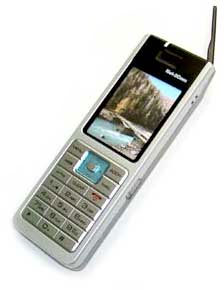 The handset is a new kind of wireless IP phone featuring open architecture, which enables free selection of applications and networks, and compact portability adaptable to the variety of networking environments, tasks, services and usages of the ubiquitous networking era. The prototype will be exhibited at CHINA ELECOM 2004 from June 23 in Shanghai and at Fujitsu Solution Forum 2004 from July 7 in Tokyo. Newly developed IP Handset Prototype

The developed handset is a prototype of a new type of IP handset featuring a built-in wireless LAN, and which encompasses both open architecture and compact mobility. The handset is capable of supporting a variety of public wireless networks through the insertion of CompactFlash cards and utilizes open architecture which makes it possible to add applications as desired. The prototype enables seamless handover between wireless LAN and various public wireless networks and is ideal for networking environments in today’s ubiquitous networking era. Net-2Com primarily developed the hardware, while Fujitsu Laboratories was mainly responsible for software development.