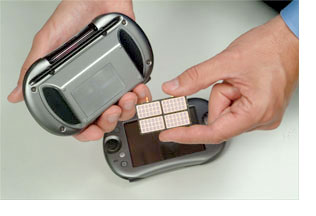 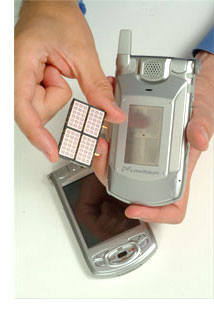 MTI MicroFuel Cells has announced the introduction of Mobion technology. The Mobion is based on patented direct methanol fuel cell (DMFC) technology, and represents a number of scientific breakthroughs that will power portable devices 2 to 10 times longer than an equivalent size battery pack, while allowing for instant, cord-free re-charging.

The announcement of Mobion is preceded by the establishment of an impressive list of world class supply chain partners. With Dupont, a worldwide materials and sciences leader as its membrane/electrode assembly partner, Flextronics, the world´s largest electronics manufacturing services company as its manufacturing partner and Gillette/Duracell intended to provide consumer fuel refill distribution, MTI Micro is poised to translate its early technology leadership into a strong position in the power pack market for portable electronics.

At the core of Mobion technology is its unique approach to managing the water produced at the fuel cell cathode, and required for the chemical reaction at the fuel cell anode. Traditional DMFCs rely on complex water management “micro-plumbing” around the cell, whereby water that is produced at the cathode is collected, re-routed and mixed with incoming methanol at the anode. The Mobion technology architecture uses a proprietary approach which manages the water flow internal to the fuel cell with no pumping required.

MTI Micro will ultimately address three primary markets, industrial, military and consumer electronics, through a phased entry approach. The Company plans its first shipment of Mobion power packs to the industrial market for use in retail, distribution and warehousing applications (such as RFID tag readers) where the shorter run-time and re-charge maintenance of traditional batteries reduce worker productivity.

MTI Micro has also begun pursuit of the military market. The Company has begun testing with government organizations and defense equipment suppliers and believes it will capitalize on those relationships by supplying rugged, high-capacity fuel cells for future military applications.

MTI Micro then plans to pursue the broader consumer market with partners such as Gillette/Duracell. Target applications will include hand-held communication devices, PDAs and other power-hungry portable electronic devices that can benefit from Mobion extended run-time, cord-free rechargeable power packs with continuous access to power anytime, anywhere.