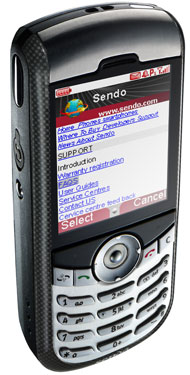 Sendo today announced that it has begun shipping its highly featured multimedia smartphone, the Sendo X to France, Italy, the Netherlands, Portugal and Spain during June, with full rollout continuing over the summer months.

The announcement follows strong sales growth for the company which confirmed that it shipped over one million handsets in Q1 and saw an increase in market shares, driven by its growing range of mobile phones. According to GfK data from March, the very popular S330 was the third highest selling pre-pay handset in the UK with 6.8% market share1. Sendo has also enjoyed significant market share increases in Portugal, Spain and France.

Hugh Brogan, Sendo’s CEO, stated: “The addition of the Sendo X to our range of mobile phones will drive further market share gains.”

The Sendo X, in addition to its class leading technical specification, will now include over €200.00 worth of free applications and content included in the product as standard, enabling consumers to fully explore and experience the multimedia capabilities of the Sendo X.