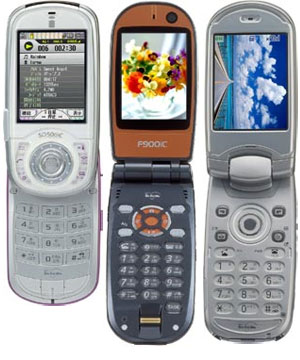 NTT DoCoMo has come up with a couple of new 2G and 3G phones that will integrate several methods of electronic payments. The 2G Mova 506iC and the 3G FOMA F900iC handsets will both offer a variety of unprecedented functions, including train pass, debit card (electronic money), credit card and personal identification card, applications previously possible only with IC-equipped cards.

The FeliCa service and I-mode smart-card give the handsets this specific type of functionality for electronic transactions, the phones will be launched early July in Japan. I have had two cell phones lost, and one stolen, this would be more of a worry to me than anything else although some people may enjoy the convenience.