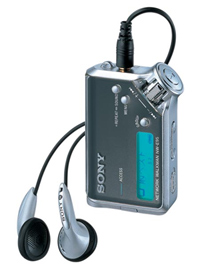 Sony Japan announced that on July 10th they will begin offering the NW-E75 and NW-E95 256MB and 512MB network walkmans. The walkman will boast an impressive 70 hour battery life but only supporting ATRAC3 and ATRAC3plus audio formats. Sony once again has limited their markets by not supporting the most widely used formats such as MP3 or WMA. It’s not cheap either, at the price of a larger hard drive based player, you only get 512MB with the Sony.