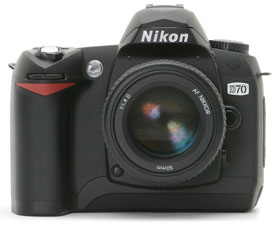 Nikon said today that they will boost production capacity for hot-selling digital SLR cameras, while eyeing an eventual exit from film compact cameras due to sliding demand.

In an interview with Reuters, managing director Makoto Kimura said Nikon would raise monthly capacity for the “D70” model to above 90,000 units by September or October, compared to 70,000 when the camera hit stores in March.

Digital SLRs are high-performance cameras that can be used with new interchangeable lenses or many of the millions originally sold for analog SLRs. They generally offer more options than “point and shoot” models, which have a fixed lens.