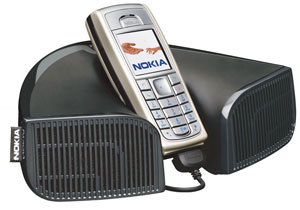 To make entering text on mobile phone applications ranging from calendar entries and notes to e-mail and text messaging faster and easier, Nokia today introduced the portable, practical Nokia Wireless Keyboard. Bluetooth technology connects this wireless full-QWERTY keyboard to the compatible phones based on the Series 60 platform, including the Nokia 7610 phone which began shipping this month, and the Nokia 6630, and Nokia 6260 phones, both announced today.

The Nokia Wireless Keyboard is optimized for heavy use of text-based applications in the mobile phones and includes a full-QWERTY keyboard, four directional arrow keys and short cut keys to speed up access to the main terminal menu and messaging applications including SMS, email and more. The Nokia Wireless Keyboard is a perfect business tool and offers support for 3rd party applications. It will be available in English and German/Scandinavian keyboard layouts and the wireless keyboard applications for compatible mobile phone will have support for English, Dutch, German, French, Italian, Spanish, Portuguese, Finnish, Swedish, Norwegian and Danish.

The Nokia Wireless Keyboard is expected to be available in the European, Asia-Pacific and Americas markets during the fourth quarter 2004 at a retail price of approximately €135 excluding local taxes. 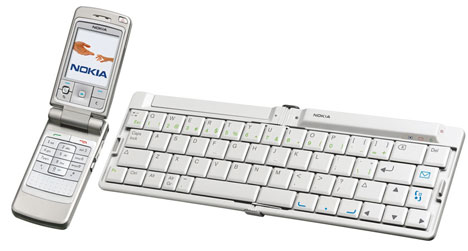 Additionally, Nokia today also announced the Nokia Music Stand, which offers good sound quality for compatible phones with a built-in FM radio or MP3 player. Other features include input for external audio devices, handsfree operation for conference calls and charging. The Nokia Music Stand is planned to be available during the fourth quarter of 2004, and expected to retail for approximately €70 excluding local taxes.