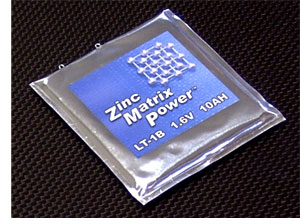 Zinc Matrix Power announced today that it signed a technology collaboration agreement with Intel Corporation to develop a new battery technology for laptop computers that could result in laptop run times of up to ten hours.

Zinc Matrix Power develops a polymer-based rechargeable alkaline battery technology that is very similar to common flashlight battery chemistry, but, has demonstrated about two times the energy to volume of today’s lithium-based laptop batteries in lab tests. This could potentially double run times in the same package size as current laptop batteries. Additionally, this technology, like common flashlight batteries, uses a water-based electrolyte which, together with its low pressure flexible plastic case work, minimizes the risk of fire or explosion due to abuse.

Zinc Matrix Power and Intel will work together to develop several aspects of this technology, including the battery packaging, charging circuits and fuel gauges, which could enable computer manufacturers to build Intel processor-based laptops powered by this new battery technology.

This new technology will be previewed in September at Intel’s upcoming developer forum. The company plans to introduce this technology commercially in 2006.