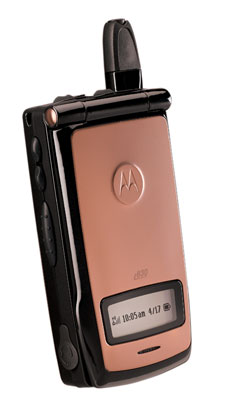 Motorola today announced the Motorola i830 will be available through Nextel. The phone is smaller than a deck of playing cards and may be the smallest walkie-talkie type phone available in North America. Weighing only 3.6 ounces and measuring a mere 3.3 x 1.8 x 0.8 inches, the Motorola i830 is smaller than an ordinary deck of playing cards, but loaded with powerful features.

“The Motorola i830 is an important addition to our portfolio of phones, combining advanced features and functionality in a sleek, compact handset with an elegant bronze color,” said Rey More’, senior vice president and general manager, Motorola’s iDEN Subscriber Group. The phone is also available with a silver-tone finish.

A flip-style mobile phone with a 65,000-color display, the powerful Motorola i830 is designed for mobile business professionals and individuals who demand full functionality in an ultra compact form. The phone is GPS technology-enabled for location-based services, including visual and audible driving directions, and is equipped with Java™ technology, allowing users to download and run applications.

Other features of the Motorola i830 include:

Speakerphone – for convenient hands-free conversations
Voice recorder – captures memos or incoming phone conversations for future playback
600-contact phone book – store up to eight numbers for a single name
Voice-activated dialing – speak to dial numbers
Wallpaper randomizer – cycle through stored wallpapers downloaded from www.nextel.com/idenupdate, on a set time basis to refresh and personalize the main screen appearance
Applications and games – pre-loaded programs such as Advanced Calculator, TeleNav 2.2 with compass, a 3D Baseball demo and Tetris puzzle game demo. Two MB of additional memory enables users to download additional applications at www.nextel.com/idenupdate.
Airplane mode – turn off the network connection and use programs, games, voice recorder and datebook while in flight (subject to FAA regulations)
Profiles – personalize settings for up to 12 environments; for example, when the self-titled “meeting” mode is selected, the phone could be set to only vibrate
External screen – shows the time, date and caller ID** without the need to open the flip phone
Audio caller ID – user-assignable ring tones allow users to instantly identify important calls without having to look at the phone**

The Motorola i830 is available through all Nextel distribution channels, including retail stores, at a price of $299.99 with a two-year service agreement.