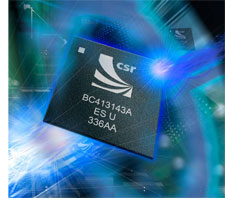 Bluetooth EDR offers maximum data transfer rates of 2.1 Megabits per second (Mbps) compared to the current 721 Kilobits per second (kbps) for v1.2 standard rate. This increase in transfer rate also means that, for a given amount of data, the EDR radio will be active up to 3 times less than a v1.2 radio, hence reducing power consumption, which greatly benefits battery-dependent mobile devices.

CSR BlueCore4 is fully backwards compatible with existing Bluetooth v1.1 and v1.2 devices. Bluetooth EDR achieves its higher data rates by using a Phase Shift Keying (PSK) modulation scheme in place of the Gaussian Frequency Shift Keying (GFSK) of standard rate. This allows more bits to be transmitted in each symbol of the packet-payload when it is sent over the radio link. However, the symbol rate is still 1 Megasymbol per second; the packet timing and structure are the same; the spectral characteristics of transmissions are virtually unchanged; and support for both modulation schemes is mandatory for all EDR capable products. Together, these characteristics provide excellent backward compatibility with Bluetooth v1.1 and v1.2. The new generation further improves on CSR’s best-in-class reputation for the ease with which its Bluetooth solutions can be incorporated into circuits and end products.

CSR BlueCore4 is being made available in two variants – one for use with external Flash memory, and one with mask-ROM. BlueCore4-External, supplied in an 8x8mm BGA (ball grid array) package, is a highly flexible solution for markets that demand the ability to upgrade quickly. For example, combined with BlueCore’s status of being the only silicon currently available to offer all mandatory and optional features of the Bluetooth v1.2 specification, BlueCore4-External presents the ideal solution for PC applications which can benefit from the ability to wirelessly transfer files up to 3-times faster or to operate multiple high-demand Bluetooth links simultaneously.

With the Bluetooth firmware committed to on-chip ROM, CSR BlueCore4-ROM offers lower costs and a much smaller footprint (3.8x4mm in a chip-scale package, or 6x6mm in a BGA which is pin-compatible with BlueCore2-ROM and BlueCore3-ROM). The ROM chip’s size and cost makes it ideal for mobile phones, headsets and other mass-production, cost-sensitive applications which increasingly require Bluetooth functionality to be integrated.

BlueCore4 offers increased on-board RAM of 48 KB compared to 32 KB on previous BlueCore silicon. Some of this extra memory is required for additional buffer space to handle the Enhanced Data Rate, while the rest ensures that future specifications such as Scattermode will be fully supported.

BlueCore4-External and BlueCore4-ROM will initially bring the benefits of Bluetooth EDR’s faster data rates to some of these existing key Bluetooth markets, speeding file transfers, reducing power consumption and enabling the operation of multiple simultaneous links. It will also open up some potential new application areas for the technology.

PCs will increasingly be asked to support multiple Bluetooth links as users type on a Bluetooth keyboard and move a Bluetooth mouse while listening to music on a set of Bluetooth stereo headphones and synchronising contact details with their phone or using the phone as a modem to connect to an email or internet service.

As ‘One Phone’ converged cordless phone (using Bluetooth) and cellular phones (using 2.5 or 3G) with a single telephone number become popular, the higher speed Bluetooth radio connection from the cordless home or business access point will allow for the simultaneous transfer of more data whilst the telephone call is being placed over the fixed line infrastructure.

Bluetooth has previously been restricted to application in ink-jet printers but EDR will enable data to be transmitted at speeds suitable for laser printers.

EDR will also open up Bluetooth to potentially wider applications in home-entertainment. A Dolby 5.1 surround sound system typically transmits its signal at rate of up to around 1 Mbps. Bluetooth EDR could offer a potential cost-effective solution for removing the wires from such systems.

The Bluetooth SIG is incorporating Bluetooth EDR as an addendum to the current v1.2 specification. CSR is sampling BlueCore4-External now, with full production in September. BlueCore4-ROM will sample in Q3 2004 with mass production planned to start in Q4 2004.

Glenn Collinson, Sales Director and co-founder of CSR, commented, “Power is a critical issue for mobile device manufacturers looking to boost the functionality of their products with wireless technologies such as Bluetooth. With data rates three times that of standard rate, CSR’s Bluecore4 makes it even easier for designers to maximise battery life in their products.” Collinson continued, “Put simply, BlueCore4 will make it possible for designers exploit new potential applications of Bluetooth EDR with the minimum possible investment in new hardware and software and the fastest possible time-to-market”