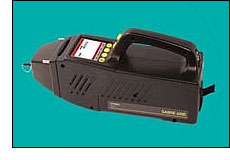 The product will be utilized by first responders, such as police and firefighters. In addition, it will also be used for commercial building applications and to screen vehicles. The SABRE 4000 is a significant upgrade to existing handheld detectors, offering detection capabilities for toxic industrial chemicals such as Hydrogen Cyanide, Phosgene, Sulfur Dioxide and Chlorine. The SABRE 4000 features a large color display panel that is easy to read.

“The portability, versatility and nanogram sensitivity of the SABRE 4000 will enable security professionals to more easily screen people and cargo and secure facility access points worldwide,” said Bill Mawer, President Smiths Detection, North America. “It will also be used to support law enforcement and corrections personnel in the war against drugs.”

The SABRE 4000 can analyze both vapor and particle samples. Particle samples are collected by wiping suspect surfaces with a swab and then inserting the swab into the SABRE 4000 for examination. Results are displayed in less then 15 seconds. In vapor mode, the samples are collected via an inlet nozzle. This sampling method provides a real-time response to the substances being analyzed.

The technology at the heart of the SABRE 4000 is Ion Mobility Spectrometry (IMS), which analyzes microscopic traces of particles. IMS can specifically identify the substance and immediately alarm the operator, which is vital to first responders, law enforcement agents and the military.