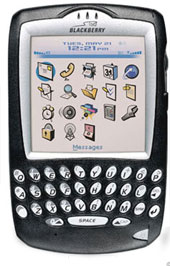 Rogers Wireless today announced the availability of the BlackBerry 7780 Wireless Handheld in Canada. The BlackBerry 7780 is identical to the 7750 BlackBerry communicator we reviewed last week with the exception of the tri-band 850/1800/1900 MHz GSM receiver for international roaming.

“BlackBerry continues to grow in popularity with already more than one million subscribers and we are pleased to work with Rogers Wireless to introduce another choice of handheld for our customers across Canada,” said Mark Guibert, Vice President, Corporate Marketing at Research In Motion. “The new BlackBerry 7780 offers integrated support for both voice and data applications and features a larger, hi-res colour screen that maximizes content viewing for e-mail, intranet, and web applications.”

The BlackBerry 7780 will sell for $499.99 with a two-year service agreement from Rogers Wireless.