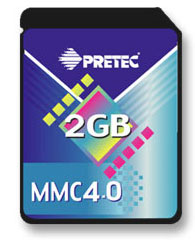 Compatible with most Secure Digital (SD) slots used by mobile phones, digital cameras, and other portable digital devices, MMC (MultiMediaCard) is one of the most popular memory cards in the world today. Version 4.0 is the most recent release of MMCA, with maximum transfer speed up to 20 times of today’s MMC, and 4 times faster than today’s SD card without any royalties for the high-speed interface. The speed of Pretec MMC 4.0 is about 200% faster than the fastest SD card available in the market and about 800% faster than Pretec MMC (V3.2) 1GB, which is the fastest and highest capacity in the market today.

Support dual-voltage operation of 3V/1.8V, Pretec MMC 4.0 is the lowest power consumption flash memory card in the world when operated at 1.8V. Pretec also offers Reduced-Size (RS) MMC 4.0, measured at only 18mmX24mmX1.4mm, which is 44% smaller area than SD card and 62% smaller volume than SD card, Pretec RS-MMC 4.0 is one of the smallest flash memory card in the world