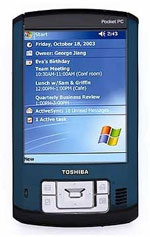 Sure Toshiba is giving e800 users the chance to update, but by looking at the Important Information for e800 update Rev 1.pdf, some users may avoid the update.

Firstly the Toshiba Screen Resolution application is not included in the update, so QVGA applications will be supported by the pixel doubling function, which is not all bad. Toshiba states that third party applications not designed specifically for Windows Mobile 2003 SE may not display properly on your screen and games may not run properly in landscape mode. When using ClearType, the screen’s display colour may be altered, and when playing video files in Windows Media Player, they will only be one-fourth the size from previous versions. Oh ya, and in some cases, battery life is less efficient.