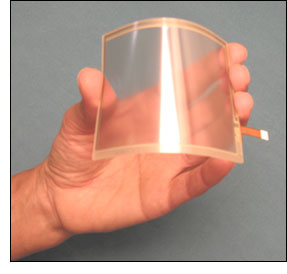 The new touch panels are targeted at mobile devices, such as cameras, cell phones, personal digital assistants, industrial equipment, and medical electronics. They have the potential to improve the form and function of products that previously did not use an LCD, or those with LCDs but no touch interface. Because the touch panels are shatterproof, product safety is also improved.

Fujitsu is offering both Film-Film (FF) and Film-Film-Plastic (FFP) touch panels. These panels are constructed of two conductive indium-tin oxide (ITO) layers separated by micro-dot spacers, with a flexible plastic film used for both the top and bottom ITO layers. The plastic backer for the FFP type provides a durable alternative to the glass substrate used in typical touch panels. Both types of touch panels provide reliable operation in temperatures up to 60 degrees C under normal conditions and 40 degrees C at 95 percent relative humidity.

The Film-Film touch panel can be adhered directly to the front surface of specially-built LCD designed to withstand direct pressure. Fujitsu’s Film-Film touch panels are typically 0.65mm thick, rated at 100 thousand words, and are available in sizes from 1.9 in up to 5.7 inches (diagonal). When treated with Fujitsu’s proprietary coatings, the panel provides a typical 87 percent transmissivity.