The BlackBerry 7750 and 7510 are two of the latest colour wireless handhelds by RIM available from CDMA 1X network operators Telus Mobility in Canada and Verizon Wireless in the USA. The 7750 has a vivid 240 x 240 pixel 65K colour display while the 7510 has a slightly shorter 240 x 160 pixel display and the 7510 works on the Mike Network with speakerphone, this is about the only difference between them. The colour display is nice to the eye compared to the old monochrome screen on the predecessors, but seems slightly useless in respects to its uses. You can’t view images or graphics on the WAP browser or within PDF and Word Documents, basically the colour makes for a nice looking interface so don’t except much more than pretty icons and blue text.

Doubled as a cellphone both the 7750 and 7510 do a very good job, just scroll the wheel to the “Phone” button and dial your number, or select a caller from your address book. You can also assign phone numbers to specific letters on the keypad by simply holding the letter down at the dialing screen. Once connected you can pretty much expect the same line quality and sound as any phone on the market, it always feels awkward holding a 3.0-inch wide thing up to your face but you quickly get used to it. After a few days I actually like it better, it provides a nicer grip compared to those super ultra mini phones everyone is making. They also come with a mini ear bud headset but I find those uncomfortable so I just skipped using them. 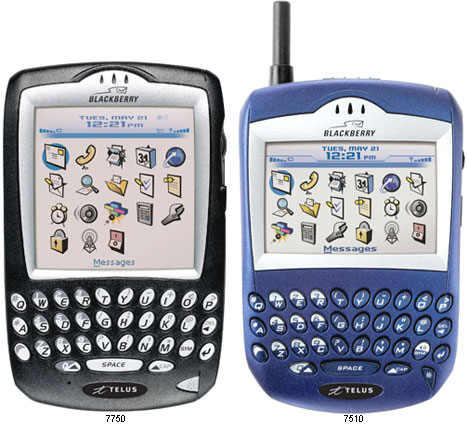 The 7510 is the only BlackBerry communicator to work on the Mike Network with direct connect and speakerphone. Although the 7510 is slightly shorter than the 7750 model (0.2-inches), it is a bit thicker (0.3-inches) considering the loud speaker in the backside of the device. The 7510’s integrated speakerphone works flawlessly, while on the desk and about 2-3 feet (optimal mic sensitivity range) you can have perfect sounding conferences and the other party will have difficulty detecting they are on a speakerphone.

The keypads are both almost identical with the exception of the 7750 having a green backlight keyboard while the 7510 was just plain white. The LCD back lighting was terrible in the 7510, compared to the 7750 it was atleast 50% less bright, it could not have been a battery since both devices had zero battery bars, I am hoping it was just a bad loaner or RIM may be looking to replace some units.

I did several speed tests for retrieving and opening attachments, both units will open a small attachment very fast, a 20KB Excel file took 2 seconds to retrieve and open, a larger 180KB PDF file took around 40 seconds. However when larger files are received the problems arise, I suspect these are network related issues but I could be wrong. When retrieving files above 700 KB, the communicator would sometimes sit in retrieving mode for over 15 minutes doing nothing, if you re-submit the retrieval request for the Full Content, the file will be retrieved in an acceptable time frame. These tests were done with no less than 100 dB signal gain.

These are both rated for data transfers at 40-60 kilobits per second (kbps) and bursts of up to 144 kbps, you should except a 1 MB file to be retrieved in 40-60 seconds tops depending on network traffic.

News and data feeds via the WAP browser are excellent for keeping up to date with breaking news, weather and any other WAP enabled sites you can visit. These are small amounts of information and can be downloaded fairly quickly to your device.

Both the 7750 and 7510 make excellent email communicators and cell phones, the only major difference is if you are looking for speakerphone and Mike network support, and of course spending an extra $50. With no contract the 7750 will run you $599 and the 7510 will be $649 on the Telus network in Canada. For the USA please check with Verizon or AT&T.