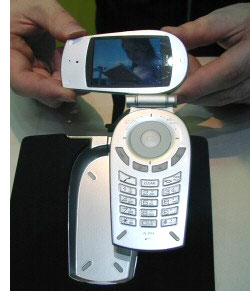 NTT DoCoMo revealed a new mobile phone concept capable of showing terrestrial digital TV broadcasts, the OnQ. The model is capable of recording programs from home and then taking them with you to watch later, it will also feature real-time TV broadcast viewing anywhere you can get coverage “timeshift viewing”.

The OnQ unit consists of: (1) a mobile phone holding a receptor for a “one-segment” broadcast, and (2) a cradle holding a hard disk device (HDD) recorder. The exhibition, however, only showed the concept, and the exhibit did not have a tuner, communication function or HDD for actual operation.