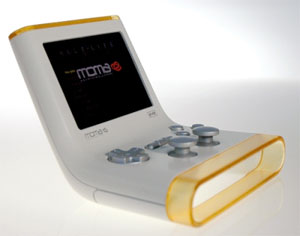 Via Technologies this week at the Electronic Entertainment Expo (e3) unveiled their plans to release a miniature entertainment system that runs an embedded version of Windows XP by 2005. The size of the Eve Mobile Gaming Console is remarkable, it even adds MPEG-2 and MPEG-4 support for watching videos, OpenGL and DirectX for PC Games, listen to MP3s or anything else your home PC can do.

The Eve integrates a 533MHz VIA Eden-N processor supporting SSE and MMX, 128MB DDR266 SDRAM, a 20GB hard drive, and a 4-inch built-in LCD monitor supporting resolutions of up to 640×480. For advanced 2D/3D graphics performance, the Eve Mobile Gaming Console integrates the S3 Graphics UniChrome Pro IGP featuring a 200MHz clock that can drive a pixel rate of up to 200 million pixels per second with two textures each. The graphics engine also features support for Z-bias, anti-aliasing, alpha blending, Microsoft DirectX 7/8/9, and OpenGL.

“The single largest challenge to enter the mobile gaming console market has always been signing up developers to deliver games for unique hardware architectures,” commented Richard Brown, Associate Vice President of Marketing, VIA Technologies, Inc. “With its native x86 compatibility, Eve has the potential to blow away any other portable gaming console on the market not just in terms of available game titles, but also in its ability to playback rich digital media entertainment files such as videos, recorded TV programs, and movies.” 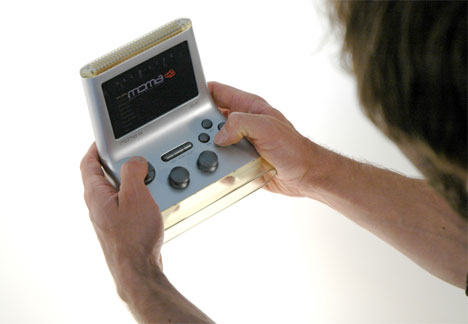 VIA Vinyl Six-Channel Audio with optimized audio headphone playback, and full Immerzio 3D audio support including EAX 1.0/2.0, DirectSound3D, and A3D have been integrated. Multiple connectivity options are provided by a CompactFlash slot, two USB 2.0 ports, 802.11b wireless lan and TV-out, including SDTV support. The gaming console uses a SIM card similar to cellular phones that will unlock the system for use, users can purchase other SIM cards to unlock games and other options on their Eve console

Eve is powered by two Lithium-Ion batteries that are hot swappable, as well as an additional jack power input. She will sell for around $500 early next year.