Sion Power has developed the first-ever lithium sulfur (Li-S) battery and has a demo running at the 2004 Windows Hardware Engineering Conference (WinHEC), the Li-S rechargeable battery is currently setup to power an HP TC1000 Tablet PC and will run for about 8 hours on a single charge. Li-S still has a long ways to go, only at half the current polymer electrolyte fuel cell technology runtimes and with a maximum of 300 recharge cycles. Polymer electrolyte fuel cells are planned for release as early as 2007, while Li-S is still 3-5 years away.

“SION Power has successfully shown the world that the lithium sulfur (Li-S) battery chemistry is a reality. This product addresses some of the important constraints that are currently limiting advancements in portable electronic devices. This battery will become the product of choice for all applications requiring longer run times and reduced weight,” said Mel Miller, president and CEO of SION Power.

It does have it’s advantages, being lightweight and long lasting, about four times longer than current Lithium-Ion batteries and with a better power/weight ratio than anything on the market, Li-S could be easily packed into the tiniest devices. 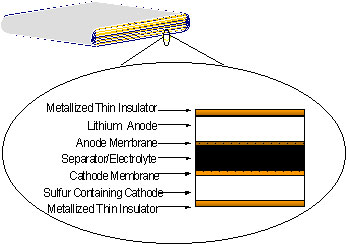