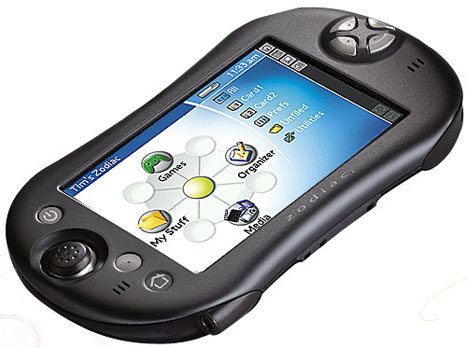 Tapwave will launch the Zodiac products and games throughout CompUSA stores nationwide this June. In addition, they will release 10 new premiere titles by the end of the year, along with 60 to 75 Tapwave Certified or Tuned titles, such as MicroQuad (arcade/racing game), Hellfire: Apache vs. Hind (helicopter combat game), Orbz (action arcade) and Acedior (RPG). Some of the Zodiac premiere titles for this year will include Activision’s Moto MTX: Mototrax and Street Hoops, Eidos’ Tomb Raider and Atari’s Neverwinter Nights. Activision’s Tony Hawk’s Pro Skater 4 just released in March, and DOOM II and Duke Nukem: Mobile Mayhem will be launching in the next few weeks.

“Support for the Tapwave Zodiac among well-established game publishers and developers continues to rapidly grow,” said Byron Connell, co-founder of Tapwave. “We’re excited and encouraged by the new opportunities that are continually opening up for this platform. This holiday season, the Zodiac will be available in retail outlets nationwide alongside new titles to show off the systems gaming power and multi-entertainment functionality.”

To ensure the continued success of the Zodiac, Tapwave is partnering with leading game publishers to bring other well-known premiere titles to Zodiac console users. Since launch, Tapwave has penned deals with leading titles from Activision, id, Eidos, Atari, Midway, Apogee, Fathammer, Sega and Epyx.

The Zodiac mobile entertainment console also provides a perfect platform to bring classic games back to life and quickly deliver more content to the Zodiac platform. With its ATI Imageon graphics accelerator and Motorola i.MX1 ARM 9 processors, the Zodiac is the first handheld device to have enough power to run full versions of “retro” game engines. Currently, Zodiac users are able to run the Sega Genesis, and Atari 2600. In fact, Sega Genesis classics like Golden Axe 3 and Altered Beast, and Atari 2600 games, like Centipede and Asteroids, are already available in the Tapwave online store. In the near future, the Commodore 64 engine will be available for the Zodiac, and will be supporting Bluetooth multiplayer play. Commodore 64 games will be sold in bundles, such as the C64 “Sports” Bundle, featuring Winter Games, Summer Games and a baseball game, or the C64 “Action” Bundle, including Sub Battle Simulator, Destroyer, Pitstop II and Super Cycle.

The company has also recently completed the Zodiac software 1.1 update, which has the following features:

— Background Music Play: You can play music in the background while playing games, viewing photos, managing your organizer or doing just about anything with your Zodiac console. An icon has been added to the status bar to provide one-tap access to music playback controls. In addition the Music/Preferences dialog features controls to customize background play behavior.

— Open Home to Last View: Some users expressed a desire to return to the last category viewed (instead of the top-level Home Screen) when they press the Home button. To allow this, we have included a new “Open to:” preference in the Home/Preferences dialog. You can select from three options: Home Screen (the standard radial menu), All Applications (the three column list view), or Last View (the view shown the last time the user exited Home).

Other subtle enhancements, based on customer feedback, were made as well. Examples include:

— “Wake to Music” in the Clock now plays the full song instead of stopping playback after 1 minute.

— The ability to advance and reverse through Photo slideshows using the trigger buttons.

— Improved calibration, noise-filtering, and movement tracking for the analog controller.

Along with a strong consumer response, developers have been quick to recognize the advantages of producing content for the Zodiac, as it has a low cost of entry and opens up new business opportunities on a powerful mobile entertainment platform. In fact, in less than a year, more than 2400 developers have signed up for the Tapwave developer program and requested the software development kit (SDK). The majority of these developers are coming from established computing and entertainment platforms (e.g., Xbox, PlayStation, and Nintendo Game Boy) and over 40% are from international markets.

The Zodiac console was designed from the ground up to work hard and play even harder. Housed in a sleek and ergonomic 6.3 ounce, anodized-aluminum design, the Zodiac console not only provides an unparalleled mobile gaming device with analog control, 3D graphics, stereo sound, vibration effects, and wireless multiplayer gaming, but also everything required for a rich multimedia experience including music, pictures and video. From a work perspective, the Zodiac offers the added benefit of running a Tapwave-enhanced version of the Palm Operating System (5.2T) and provides immediate access to thousands of existing applications and games already available on the operating system.

The console is offered in two models — the Zodiac(1) for $299 (32MB RAM) and the Zodiac(2) for $399 (128MB RAM). Both models are currently available at www.tapwave.com, and will also be available at CompUSA nationwide this summer.