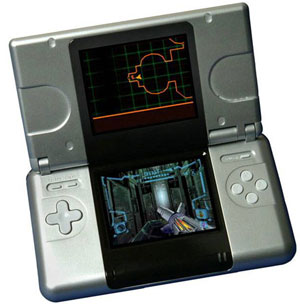 The Nintendo DS photo has first been shown on USA Today earlier this morning. The new portable gaming console from Nintendo will be released at the E3 2004 Game Industry Trade show today. Although not entirely impressive looking, the Nintendo DS does have a touch-sensitive screen and another standard screen, both 3-inch LCDs.

The DS has Bluetooth for head-to-head gaming with other Nintendo DS systems, slots for older Gameboy Advance cartridges, and a new smaller DS slot. The DS is said to have more processing power than the Nintendo 64 console released in 1996 but nowhere near today’s standards.