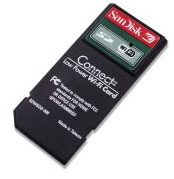 SanDisk has announced a dual capable Wi-Fi SDIO card with 256MB of memory. This design is geared for Pocket PC users who only have a single SD slot on their device, but require extra space and wireless capabilities. The Wi-Fi SDIO card will not work in Pocket PCs as of yet, but once Windows Mobile 2003 SE hits the store shelves, SanDisk will be sending these out. Unfortunately, SanDisk doesn’t expect the necessary drivers to be available for a Palm OS version.

SanDisk’s Wi-Fi SDIO card with 256 MB of memory will have a suggested retail price of around $150.