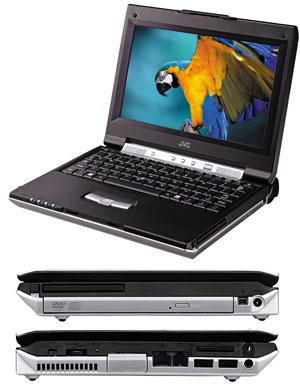 JVC is making its first attempt at the PC market in June with its MP-XV841. It is based on an Intel Centrino package that includes Pentium M ULV processor running at 1GHZ. The computer also features a 8.9-inch LCD, 256MB of memory, and 40GB hard drive and its ‘secret weapon’ an optical drive that supports DVD reading and CD writing. This is almost unheard of in a machine of its size, 3lbs, 4oz..

“We are not trying to be number one in market share, that’s for sure,” says Al Levene, vice president of recording media and new products at JVC of America. “We’re going after a very small segment of the market: the mobile professional who has fairly light computing needs. They are not a gamer but need to do word processing, spreadsheets, presentations, read e-mail, and also be able to watch a DVD on the airplane.” JVC has not finalized distribution plans for the product.

This target audience makes up for less than 10 percent of buyers and could lead to some disappointing sales figures.

“That segment is a very small niche in the U.S. today, especially in retail. It accounts for 5 percent of total sales,” Bhavnani says. JVC may face a problem with brand perception, he adds. “Their brand name is more consumer electronics and stereos, and I don’t know how well [potential buyers] will react.”

Douglas Krone, CEO of Dynamism, agrees. His company is a Web-based retailer that specializes in importing electronics from Japan and selling them in the U.S. He has been selling JVC domestic laptops for a long time.

“I think it will be challenging,” he says. “From a consumer standpoint, Sony has such an entrenched brand-name compared to what JVC will have selling in the U.S. It’s kind of a niche product and will be competing with products from Fujitsu and Sony’s [Vaio] TR.”

The “mini-laptop” market, however, is quite small now, compared to the rest of the laptop market. IBM dropped their Thinkpad S30 and Toshiba no longer produces their Libretto. Both of these would have been direct competitors to the JVC MP-XV841 with its 8.9-inch display.

The company’s main weakness is that it can’t compete with the larger development and advertising budgets of bigger competitors, she says. “Many people do not even know [JVC] has PC products,” Shingyouchi says.

Anyway you look at it, it will be an uphill battle for JVC to come out of this ahead and with a price tag of $2400, this laptop is definitely not cheap.