Sony is introducing both SCSI and USB2 external drives based on the technology for easy connectivity to Windows and Mac based notebooks, desktop PCs and workstations, in addition to a small juke box for automated backup environments.

Combined with high transfer speeds of 9MB per second for writing, and 11MB per second for reading, the Professional Disc for Data format offers increased performance for one fifth of the price of the existing 5.25-inch MO media on a cost per gigabyte basis. 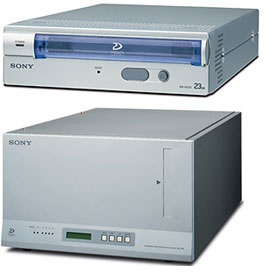 With a durability that allows for a 50-year shelf life and the option to automate, Sony’s Professional Disc for DATA range is the most advanced optical storage and archiving solution available on the market. As the natural successor to the 5.25-inch MO, Professional Disc for DATA also offers the advantages of this performance for a wide range of applications in vertical sectors such as Telecommunications, Finance, Broadcasting, Medical and the Government. Possible IT applications range from video / audio editing, document imaging, graphic design / pre-press and web storage to voice recording and email archiving.

Sony has already received positive feedback from major industry players who are committed to supporting the new format. Optical jukebox manufacturers such as ASM, DSM, SER, New ATG and DISC have been evaluating the drives and plan to offer their own products based on the Professional Disc for DATA.

The branded, external Professional Disc for DATA drives (BW-RS101 with SCSI, BW-RU101 with USB2 interface) will be available from from May, at a price between €3,500 and €4,000. The juke box (BW-J601) will be launched around the same time, at a price in the region of €20,000. The internal SCSI drive (BW-F101) will be avaialble through specialised distrubutors from March. Both the rewritable (PDDRW23) and write-once media (PDDWO23) are available for approximately €45 each.