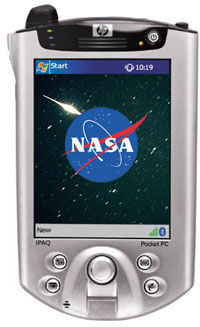 HP today announced that the HP iPAQ h5550 Pocket PC will be used in space by the Expedition 9 astronaut and cosmonaut crew aboard the International Space Station Soyuz 8 space craft. The iPAQ h5550 and accompanying accessories were launched on April 19, exactly four years after the introduction of the first iPAQ Pocket PC.

The iPAQs will be used as mobile productivity tools to record daily crew procedures, write personal memos and check e-mail and calendars. The space crew will also be able to listen to music, view photos from home and read e-books, allowing them to have some of the comforts of home on their journey. The devices will remain aboard the space station and be reconfigured for each new crew. For the next flight, two additional iPAQs are expected to launch to the station for a total of four iPAQs.

Ground support at NASA’s Johnson Space Center and Russia’s Star City Space Center will use the iPAQ Pocket PCs during the training process and to evaluate new applications for future flight crews to use.

“HP is driving mobile computing to new heights with leading-edge technology, enhancing the astronauts’ productivity and helping them sustain a personal connection to life back home,” said Alex Gruzen, senior vice president and general manager, mobile computing global business unit, Personal Systems Group, HP. “NASA chose to work with HP to deliver a mobile solution that is robust and versatile enough to meet the challenges and demands of an uncommon environment.”

The HP iPAQ h5550, passing NASA’s stringent flight certification tests with flying colors, required few modifications by the space agency’s engineering team. Since the devices did not have to be custom-designed or reengineered to make them suitable for space travel, NASA was able to select the iPAQs and deliver them well ahead of schedule. In addition to the iPAQ h5550 units, NASA received rechargeable batteries, PC Card Expansion Packs, barcode scanners and Secure Digital memory cards for later use on the space station.

In the future, HP iPAQ h5550 devices will be outfitted with barcode scanners and NASA-developed software to inventory equipment on the International Space Station.

Earlier this year, the White House appointed HP Chairman and Chief Executive Officer Carly Fiorina to the Presidential Commission on Implementation of United States Space Exploration Policy. Fiorina joined former Air Force Secretary Pete Aldridge on the commission, which is charged with advising the White House on what sort of science agenda should be considered for the moon. One of eight appointees to the commission, Fiorina will contribute a broad rage of high-tech expertise.