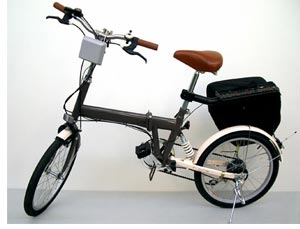 Yuri Gitman has created a new mobile form of wireless hot spot. It’s a Magicbike and it turns common bicycles into WiFi hotspots.

The end effect creates bicycles that broadcast free WiFi connectivity to their proximity. The technology behind this is not complex. Magicbike is simply a creative configuration, or reconfiguration, of widely available computer, bicycle, and WiFi gear. WiFi antennas mounted on the bike’s frame feed into a laptop embedded into a specially outfitted bicycle side-bag. The bike’s embedded laptop is configured to be a wireless repeater and hotspot. The bike receives its uplink connection either from the cellular network or from far-off WiFi hotspots (with the help of its mounted antennas). With this uplink connection from any one of various sources, the bike is able to serve-up its own Internet connection.

A Magicbike hotspot operates like standard hotspots, able to serve up to 250 users in a radius of 30 meters indoors and 100 meters outdoors [although its antennas can increase the hotspot’s accuracy and range]. A group of bikes can repeat and/or bridge the signal down a chain of wireless bikes. Meaning, a bicycle gang can snake into subways stations or across hilltops to provide Internet connectivity to (fringe but) vital communities and spaces ignored by the traditional telecommunications industry. A grassroots bottom-up wireless infrastructure can be formed and pedaled to any place accessible by bicycle.