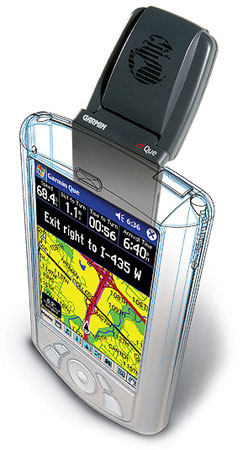 Garmin has announced that the company will offer its Que application with a new CompactFlash GPS module that is optimized for popular Pocket PC handhelds. The cf Que 1620 is a module featuring Garmin’s new Que software application, which delivers high-performance GPS location, mapping and turn-by-turn navigation capabilities to Pocket PC devices.

Unlike most GPS peripherals for the Pocket PC platform, the cf Que 1620 has a flip-up antenna, which can be adjusted to optimize GPS reception — whether the Pocket PC is secured in a vehicle with a PDA mount (included in the package) or carried by hand. Measuring 2″ x 1.7″ x 0.5″ (HxWxD) and weighing a mere 1.5 oz., it utilizes power from the handheld device’s battery, making it a powerful addition for business users operating Pocket PC handhelds.

Expected to be available in May 2004 with a suggested retail price of $267.84, the cf Que 1620 will ship standard with a set of MapSource City Select CDs, a Pocket PC dash mount, an installation CD-ROM, and a quick-reference guide.