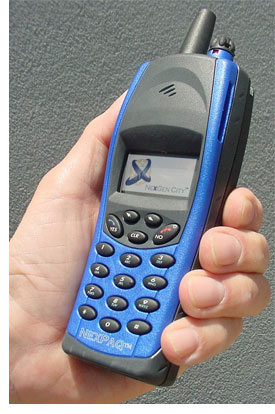 NexGen City, manufacturer of mobile, high-speed wireless communications systems for first responders, today announced that it has developed the industry’s first VoIP push-to-talk radio handset for use with its NexLink wireless broadband mobile network. The NexPaq personal communicator combines the standard public safety features of a PTT radio with those of a PDA. Testing is well underway. Availability of production units is planned for the fourth quarter of 2004.

“The innovative design of our NexPaq communicator reflects extensive feedback from local, state, and federal public safety officials and users, as well as from city IT chiefs across the country,” said Richard Dwelle, NexGen City president. “We couldn’t find any commercially available devices that matched our customers’ needs, so we designed our own from the ground up,” Dwelle added. “We’re on schedule for production unit shipments later this year, as we committed when we first announced our communications system in January.”

The rugged, lightweight NexPaq communicator is powered by an Intel 400 MHz microprocessor and uses the Linux operating system. The first-generation device includes a backlit display, keypad, cursor controls and programmable multi-function keys. As part of its PTT functionality, the handheld radio has an emergency call button, a channel selection switch and volume control. A command and control center can create virtual talk groups on the fly so that different first responder organizations arriving at the scene can communicate immediately on the same channel.

The NexPaq communicator is an integral element of NexGen City’s mesh-based NexLink network that combines data, VoIP calls and streaming video at broadband connection speeds of up to 1.5 Mbps, all while traveling at multi-lane highway velocities. The handheld complements the company’s NexCard wireless interface for laptops, fixed intelligent wireless routers and access gateways. Both mobile and fixed infrastructure devices are “network nodes” acting as repeaters and routers. This creates a self-forming and self-healing network with ad hoc peer-to-peer networking capabilities. With an embedded wireless router in every device, each unit can extend the network, determine optimum paths for data transmission and provide additional paths for connectivity. In the event of a major emergency that disables local fixed devices, first responders arriving on the scene can form a network automatically and seamlessly with their intelligent NexPaq communicators.

The NexPaq communicator supports biometrics with a 10-bit analog-to-digital converter so that, for instance, firefighters’ heart rates, respiration rates and oxygen tank levels can be monitored constantly by their battalion chief outside a burning structure. Additionally, a video camera can be attached via the unit’s USB interface so that law enforcement personnel could, for example, send real-time video to fellow officers in the vicinity, or back to a command and control center.

Commenting on the NexPaq engineering program, Dave Meitzen, NexGen City chief of engineering, said, “We’re committed to delivering wireless broadband solutions that meet the highest performance and reliability criteria possible for first responder and municipal workers alike. Our engineering team’s expertise and applications ‘know-how’ enables us to design and build ruggedized, field proven systems to withstand harsh climatic environments, daily use in the field by all city personnel, as well as adverse conditions under which first responders often operate.”

The NexPaq communicator meets environmental, shock and vibration requirements compliant with MIL STD 810F, all in an “Intrinsically Safe” magnesium-based package. A variety of speaker and microphone attachments and accessories will also be available.