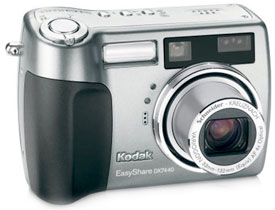 Kodak today announced three new digital cameras under the Easyshare line, plus a new printer dock. The DX7440 with 4-megapixel resolution comes with a Schneider-Kreuznach Variogon 4X optical 33-132mm equivalent zoom lens, and 0.2-second click-to-capture rating. The CX7530 and CX7330 have 5 and 3 megapixel resolution CCD’s plus 3x optical zoom. The DX7440, CX7530 and CX7330 camera will be available in the summer at a suggested retail prices of just £299.99, £249.99 and £149.99 respectively.

The EASYSHARE CX7530 camera is ideal for the digital photographer who wants great photos, one-touch picture taking simplicity, plus a degree of creative flexibility. It offers 5-megapixel (MP) resolution for rich photographic detail as well as the ability to enlarge photos up to 20 x 30 inches, a 3X optical zoom lens, an exclusive on-camera “Share” button and integrated digital photo album, and multiple pre-set scene modes. The CX7530 camera will be available from the beginning of July 2004 at a suggested retail price of just £249.99.

Providing both convenience and exceptional picture quality, the sleek, portable KODAK EASYSHARE printer dock is the simplest way to get real KODAK prints at home at the touch of a button. KODAK EASYSHARE digital camera owners also benefit from one-touch picture transfer to a connected computer and camera battery recharging – plus reconditioning for improved battery performance – in less than 3.5 hours.

“Response to the EASYSHARE printer dock over the past year has been nothing short of astonishing, but we’re not about to rest on our laurels,” said Richard Stearns, general manager of home printing systems for Kodak’s Digital & Film Imaging Systems operation. “By opening the platform to other manufacturers’ digital cameras via PICTBRIDGE technology and popular memory card formats, plus compatibility with EASYSHARE 6000/600 and 7000/700-series cameras, millions of people will have the opportunity to make real KODAK photos in as little as 90 seconds with just one touch.