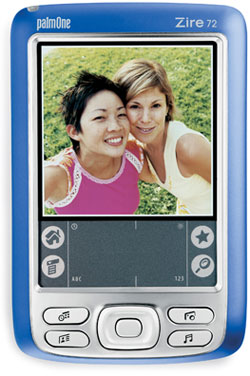 PalmOne has extended their line of Zire handhelds today with the announcement of the Zire 72 and Zire 31 devices. The Zire 72 with a built-in digital camera, audio/video capture and playback ability, and Bluetooth wireless technology offers affordable multimedia capability for $299 US. The Zire 31 handheld adds colour, expansion and MP3 functionality in a sleek design targeted to lower budget shoppers for only $149 US.

“The Zire 72 handheld works as hard as it plays. Now you can shoot photos, capture and watch video clips or create and edit Word- and Excel-compatible files,” said Ken Wirt, palmOne senior vice president and general manager of the Handheld Business Unit. “And, the Zire 31 handheld, with its bright, colorful screen, is the first color, full-featured handheld launched at under $150.”

Zire 72 Handheld
The Zire 72 handheld, with a built-in 1.2-megapixel camera and MP3 player, includes what users need for work and play. In addition to capturing photos, the Zire 72 handheld is the first PDA from palmOne to enable video capture. Users can watch video clips on a brilliant 320 x 320 color screen, and the MP3 player allows users to carry the tunes they enjoy and listen in stereo. The Zire 72 handheld enables users to create and edit Word- and Excel-compatible files, as well as synchronize with Microsoft Outlook (Windows only). With the Zire 72 handheld, users can even share files, and get wireless email and Internet access with built-in Bluetooth technology. 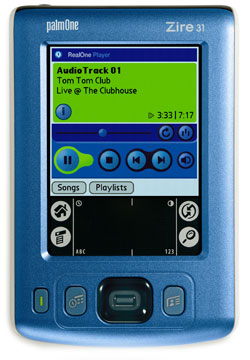 Zire 31 Handheld
The Zire 31 handheld from palmOne is designed for value-conscious students, superparents and seniors. It can store thousands of phone numbers, addresses, lunch dates, meetings, birthdays, doctors’ appointments and shopping lists. Its bright, colorful screen is perfect for viewing photos of family and friends. Zire 31 handheld owners can select from more than 20,000 available applications and use the expansion slot for adding more memory, applications or MP3 tunes.

Accessories
palmOne also introduced a full range of new accessories, including the following (all prices are estimated U.S. street price):