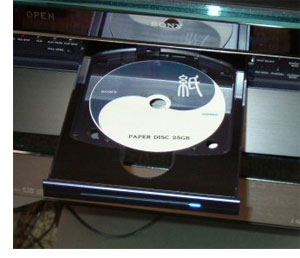 Toppan and Sony have announced that they have jointly developed a 25GB paper disc based on Blu-ray Disc technology.

Blu-ray Disc has been commonly known for allowing more than two hours of high-definition program recording. Using this disc-structure, the new paper disc will be composed 51% of paper.

Hideaki Kawai, managing director and head of the Corporate R&D Division of Toppan commented, “Using printing technology on paper allows a high level of artistic label printing on the optical disc. Since a paper disc can be cut by scissors easily, it is simple to preserve data security when disposing of the disc.”

Masanobu Yamamoto, senior general manager of Optical System Development Group in the Optical Disc Development Division of Sony said, “Since the Blu-ray Disc does no require laser light to travel through the substrate, we were able to develop this paper disc. By increasing the capacity of the disc, we can decrease the amount of raw material used per unit of information.”

The worldwide production of optical discs is approximately 20 billion unites per year, and optical discs are being adopted widely. The combination of paper material and printing technology also is expected to lead to a reduction in cost per disc and will expand usage.

Sony and Toppan will announce details regarding all of this at the April Optical Data Storage 2004 conference in Monterey, California.