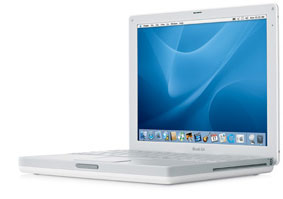 Apple today has announced a new line of PowerBook G4 notebooks and an update for the iBook. The new PowerBook notebooks come with a 1.5 GHz PowerPC G4 processor while the iBook will come with a 1.2 GHz. The AirPort Extreme 54 Mbps 802.11g wireless networking and Bluetooth can be added to the iBook but is included with the PowerBook.

The new 12- and 14-inch iBooks offer a perfect mix of portability, performance and affordability, with faster PowerPC G4 processors and up to six hours of battery life for all-day mobile use in the classroom or on the road. Providing best-in-class graphics capabilities, each iBook G4 offers ATI Mobility Radeon 9200 graphics with 32MB of dedicated DDR memory and AGP 4X support for gaming and watching DVDs. The iBook G4, with a sleek polycarbonate plastic enclosure weighing as little as 4.9 pounds, is made even more durable with slot-load optical drives.

Both notebooks include iLife ‘04, Apple’s award-winning suite of digital lifestyle applications including iTunes for managing digital music, iPhoto for organizing and sharing digital photos, iMovie for digital movie-making, iDVD for creating and burning Hollywood-style DVDs and GarageBand™, a revolutionary new music application that turns a Mac into a professional-quality musical instrument and recording studio.

They also ship with Apple’s latest operating system, Mac OS X version 10.3 “Panther,” pre-installed. Customers can take advantage of FileVault, which uses the latest security standards and 128-bit encryption technology to ensure that data in the home directory is kept secure; Exposé, a revolutionary new way to instantly view all open windows; Instant On, which wakes the PowerBook from sleep in just one second; and Automatic Networking, which automatically switches the network connections between Ethernet, 802.11 and modem. With enhanced Windows compatibility, files, printers and network services can easily be shared with Windows users.

The iBook G4 comes with a collection of productivity and entertainment titles including AppleWorks, Quicken 2004 for Mac, WorldBook Encyclopedia 2004 Edition and Tony Hawk’s Pro Skater 4.