According to the new Pyramid report, in the next few years coming, Americans will utilize more mobile data communications by Wi-Fi rather than by using 2.5/3G networks. Pyramid forecasts this for paid and free Wi-Fi users compared to 2.5/3G users. We compared US forecasts for paid 2.5/3G users with forecasts for paid and free Wi-Fi users (shown below). For 2.5/3G, we included the following technologies: EDGE, 1x, EV-DO and UMTS, of which the overwhelming majority of users is represented by 1x.

This trend is not necessarily bad news for 3G. After all, a consumer may very well use both 3G and Wi-Fi. However, this trend should be a wake-up call to any carrier offering or planning to offer a cellular data service.

Bundling Wi-Fi and Cellular is Working for T-Mobile
T-Mobile has taken a great deal of criticism over the past few years for its investment in Wi-Fi deployments. However, we believe that by bundling Wi-Fi and cellular, the carrier has created a service worth more than the sum of its parts. Furthermore, a bundled Wi-Fi/cellular service is particularly attractive to business users – typically a higher-margin customer segment. 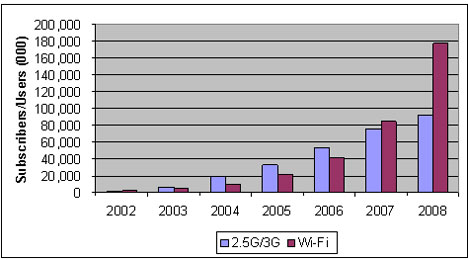 T-Mobile reports that more than 30% of its hotspot users are also cellular subscribers. While we cannot say that Wi-Fi alone resulted in added cellular subscribers, the correlation between the two services is significant. We believe that T-Mobile can justify its Wi-Fi investment purely through cellular customer acquisition and retention. A 0.2% decrease in T-Mobile’s customer churn from the enhanced utility from a bundled Wi-Fi/mobile plan would more than justify the Wi-Fi venture.

That said, there is still plenty of money to be made from commercial Wi-Fi revenues. Direct Wi-Fi access revenues in the US could exceed $1.5bn by 2008.

It is remarkable how quickly Wi-Fi has become the benchmark by which other wireless data services are measured. In March 2004, AT&T Wireless CTO Rod Nelson said the following about his carrier’s four-city UMTS upgrade: “Our UMTS service will turn these markets into giant ‘hot spots,’ providing customers with connection speeds rivaling those of some broadband services.”

People understand what a hotspot is, so AT&T is using this frame of reference for promoting UMTS. Today, it is becoming increasingly common to see wireless carriers position their services against Wi-Fi or co-opt Wi-Fi terminology in an effort to sell 3G services. Verizon Wireless often emphasizes the “Wi-Fi-like” speeds of EV-DO.

Looking ahead, Wi-Fi will be, for millions of people, their first experience with broadband wireless technology. Savvy carriers will learn how to turn these Wi-Fi users into cellular customers through creative bundling and pricing.